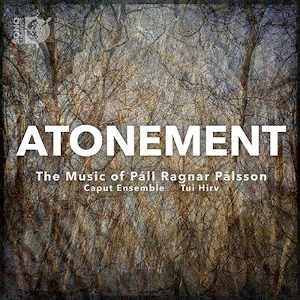 
Composing is a meditative process I embark on in every piece I compose. It doesn't feel like beginning a new journey with each composition though, rather continuing from where I left off in the last one. This continuity reflects in my music – one sound grows out of the last one, like branches of a tree. Associations and encounters find their way directly to the music, in terms of narrative, atmosphere or structure. It is a conscious process of translation of some kind, and I gratefully allow it to happen, never applying force or excess intellectual argumentation. All the technique I have learned is in service of that unstoppable movement, never dictating the flow.

Exploring the DNA of my artistic development, I‘d say there are two major factors that have influenced me. One of them is to have been born in Iceland, growing up in a protected environment that leaves one with the feeling (or illusion) that one is free to do anything he wants. Then again moving to Estonia to study composition made me re-evaluate my perceptions on life and art so far. The brisk salty breeze of the ocean got replaced by scent of burning wood rising from the chimneys of old houses near the forest and the playful indie scene of Reykjavík by sophisticated academic concert life in ancient churches and guildhalls of Tallinn. It was the environment where I found my musical language, plunged into East-European art and history, travelled and made friends, connected deeply with the spiritual approach Estonians have to music and their somewhat ancient character. One of those old souls I got to know is my wife Tui who sings on this album. Our singer-composer collaboration started right away and has tied together our professional and personal lives in an especially fulfilling way.

The compositions on this album illustrate the shift of us moving back to Iceland and continuing life there with a new perspective. The oldest piece on the album was composed in 2011 when we lived the slow-paced life of young parents in the countryside-like outskirts of Tallinn whereas the latest piece was composed in Iceland and premiered in Berlin 2018. The texts chosen for the compositions demonstrate my influences during the time quite appropriately. Stalker, Tarkovsky's famous screenplay from where I borrowed the monologue, was shot in Tallinn and cleverly displays references to Estonia‘s troubled history. Wheel Crosses under Moss contains excerpts of folk hymns from Vormsi, an island off the West coast of Estonia once inhabited by Swedes, until the whole community was evacuated in fear of the Soviet Army. Other texts are by Icelandic artist and poetess Ásdís Sif Gunnarsdóttir, whom I have collaborated with on numerous occasions. In the album‘s title-piece poem, Atonement, Ásdís Sif sensitively describes a feeling of re-connecting with herself and finding inner peace. The word itself – atonement – indicates my approach to composition in music and life.