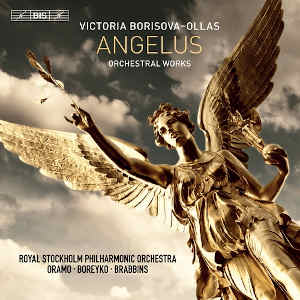 Borisova-Ollas: Angelus*, The Kingdom of Silence**, Before the Mountains Were Born**, Creation of the Hymn*, Open Ground^


Born in Russia, Victoria Borisova-Ollas has lived in Sweden since 1993. In the international music press, she has been described as ‘a composer with a sparkling individual voice’ and an ‘orchestrator of the greatest virtuosity’. This is borne out by this well-filled disc which features five works from 2003–2013, in performances by the Royal Stockholm Philharmonic Orchestra (RSPO) with which Borisova-Ollas enjoys a collaboration of long standing.

Angelus, which opens the disc, is also the longest work with a duration of some 22 minutes. It was composed for the 850th anniversary of the city of Munich and takes the listener on a walk through the city and its many clock towers. Angelus is conducted by Andrey Boreyko, who has championed the music of Borisova-Ollas for many years and who here also conducts Creation of the Hymn, a reworking by the composer of a piece for string quartet. Martyn Brabbins has also been entrusted with two works, including Before the Mountains Were Born. Composed in 2005 for the RSO Stuttgart, it includes a virtuosic ‘cadenza’ for the four of the principal woodwind players (flute, oboe, clarinet and bassoon). In the final work on the disc, Open Ground, it is Sakari Oramo, chief conductor of the RSPO, who brings out the towering chords and ethereal shimmerings of Borisova-Ollas’ score.

I heard a part of a Swedish radio broadcast of Angelus two years ago and found it very interesting and beautiful. Somewhat in the style of Valentin Silvestrov if I remember correctly; I couldn't listen that hard while driving.
I was actually planning to email BIS and ask them to record it but I never did, and obviously didn't have to. I will buy it as soon as it is released at eclassical.com.
Edit: According to BIS, I will have to wait at least a month for its release.

Now, as this disc is released, let me continue from my earlier comment - and this time it's about extremely good customer service.
Yes, I did email Bis to tell them how glad I was that Angelus had been recorded. I got an answer from Mr Bis himself, Robert von Bahr, suggesting that I should put an order for their very first CD (Jewish liturgical music). I did and two days later the Borisova-Ollas record arrived by mail, one month before its actual release.
Not only extraordinary friendly. Also, in my opinion, there is some extraordinary music on this disc.