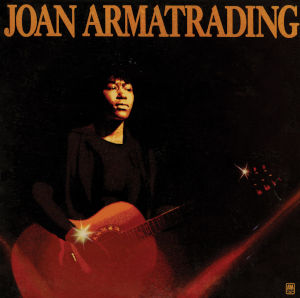 Produced and recorded by legend Glyn Johns, Joan Armatrading is the breakout record that saw Joan assume full command of her extraordinary talents and leap to the forefront of rock's great female stars. A soulful, soaring voice and a powerful and evocative songwriter. The smash hits include "Love and Affection," "Down to Zero," and "Somebody Who Loves You."

Joan Armatrading's hybrid CD/SACD is mastered Direct-to-DSD from analog tape by Kevin Gray at CoHEARent Audio from the best source available- phenomenal-sounding 1/2" safety copy of the original stereo master tape. The remastering is amazing! Thanks to Glyn Johns' recording and production work, Joan's vocals and guitar playing have never sounded so rich, resonant and dynamic. This is an audiophile demo disc all the way.

The album art is beautifully restored by IR's Tom Vadakan and housed in a super jewel box.

The folks at Intervention must have been dancing around the room and hugging each other when they took delivery of the tape and had that first listen to it. It was very well recorded in the first place AND the tape itself is clearly in excellent condition.

Kevin Gray has left well enough alone and restricted himself to a pretty flat DSD transfer. To the extent that even finessing the EQ levels between tracks has not been touched. And it rewards turning up the volume. Beautiful really.

One small quirk that I have noticed on recordings from this era is that some overdubs sound unnaturally forward and significantly louder than the rest of the track. I'm guessing mixers did this on purpose and that on vinyl the effect was not as pronounced (and artificial) sounding as it can be in the current Hi Rez environment. There is the odd instance of this effect here.

Even if you are not a JA fan this disk is worth getting for the sound quality experience alone. Sounds like vinyl......but with better detail, sound stage, separation, dynamics, etc, etc.

Beyond beautiful. You have to credit producer/engineer Glyn Johns (at Olympic Studios) for knowing how most tastefully to showcase Armatrading's powerful voice and songwriting, on her third and best record. It's an acoustic/electric folk-rock approach, with excellent playing all round, and a feeling, not of understatement exactly, more of something being held in reserve for those breakout moments. Listening on headphones I haven't noticed any issues with mix levels - well, one electric guitar solo is unusually loud, but I don't think it has anything to do with the LP format, it's just the way they heard that song. The mastered sound is everything one could wish for. Remarkably, it was sourced from a half-inch safety copy.