CELEBRATING THE IMMORTAL NATURE OF LIFE

Vladimir Jurowski and the Rundfunk-Sinfonieorchester Berlin continue their exploration of Mahler with a new recording of Das Lied von der Erde, on which Dame Sarah Connolly and Robert Dean Smith provide the vocal contributions. Residing somewhere between symphony and song cycle, Das Lied is one of Mahler’s most profound and loved works, marking an important step in the composer’s career, as well as in his private life. Jurowski approaches the piece as Mahler’s deliberate move from a “heroic” Beethovenian model towards a more “lyrical”, Schubertian attitude. Throughout Das Lied, and particularly in the contemplative last movement, “Der Abschied (The Goodbye)”, Mahler seems to come to terms with the mortality of man while celebrating the immortal nature of Life.

The PENTATONE label already has a very fine recording of Mahler’s penultimate completed work ‘Das Lied von der Erde’ in their catalogue from Marc Albrecht and the Netherlands Philharmonic Orchestra Mahler: Das Lied von der Erde - Albrecht , so it seems reasonable to ask why another? One could speculate that the opportunity to record the work again with their recently signed star conductor Vladimir Jurowski was an opportunity not to be missed and in the event it certainly proves to have been a wise decision. This new release is taken from a live recording made in the Berlin Philharmonie on 14 October 2018, a co-production with Deutschlandfunk Kultur and the Rundfunk-Sinfonieorchester, Berlin.

In the liner notes Jurowski contributes an essay entitled ‘A song on the mortality of man and the mortal nature of Life’ in which he expresses his belief that “Mahler consciously juxtaposed here the mortality of humans and the immortal nature of Life itself, and in this sense, he seems closer to the teachings of Buddha or Lao Tse than to the maxims of Christianity or Judaism.” How much this conductor’s spiritual philosophy influences the performance is for others to speculate, but there is no doubt that he inspires the players of the Rundfunk-Sinfonieorchester, Berlin (the orchestra of which he is currently the chief conductor and artistic director) to give of their best and deliver what, judged by any yardstick, is a most impressive account of this work. Janowski’s well considered pacing and subtle use of portamento at various points in the score also allows appreciation of the many beautifully shaped individual solo passages from the RSB players that abound throughout this score.

Robert Dean Smith is the tenor soloist (as he is for Ivan Fischer’s new studio account of Das Lied von der Erde recorded a year earlier in 2017). As an outstanding Heldentenor who has performed all the main Wagner roles (Tannhäuser, Lohengrin Meistersinger, Tristan etc.) he is fully up to the taxing opening song ‘Das Trinklied von Jammer der Erde’. It is, however, also apparent that at 62 (when this performance took place) his voice had, understandably, lost some of its freshness from earlier years; nevertheless his secure singing and clear delivery of the texts in all three songs is not to be underestimated.

Without doubt what makes this recording very special is the sublime singing of Sarah Connolly in the three alto songs. Her exquisitely nuanced performances of each illustrate her deep identification with this music. In ‘Der Einsame in Herbst’, she perfectly conveys the introspective character of the poem through her clear enunciation of the text and the warmth of her delivery while also remaining meticulous in her attention to Mahler’s directions. Her delicately poised ‘Von der Schönheit’ is lustrous in the outer sections and she articulates the challenging wild percussive central section with ease. The full gamut of Connolly’s miraculous vocal artistry is displayed in her achingly beautiful account of ‘Der Abschied’ that, without doubt, matches those from the finest interpreters of the past.

The multi-channel SACD was recorded in Hi-Res PCM by Florian B Schmidt (producer and post- production) and Henri Thaon (recording engineer). The sound has all the requisite clarity and definition one could wish for, spacious yet detailed, and with a fine balance achieved between orchestra and soloists. Audience noise is virtually absent and there is no applause after the work’s conclusion.

The presentation of this issue does, however, leave much to be desired. Careless proofing of the booklet notes – for example, Kath-leen (sic) Ferrier – and though the German/ English texts are provided, the whole of the final verse of ‘Der Abschied’ has, unforgivably, been omitted. The timings for each of the work’s six movements printed on the digipak are also suspect, failing to match those shown on my player or PC. In fact Jurowski’s performance lasts 60.30 not 62.43 as stated.

These irritations aside, I have no hesitation in wholeheartedly recommending this recording, not only for the sensitivity of Jurowski’s insightful conducting but especially for the unmissable eloquence and searching musicality of Sarah Connolly’s wonderfully moving performance, one that no Mahler devotee will wish to be without.

Another PCM recording, should have been DSD...

The Fischer on Channel Classics is DSD.
Review to follow shortly.

Slightly odd co-incidence and timing that two new recordings of 'Das Lied von Der Erde' are to be released on the same day in September. As always it raises questions; what more can be extracted from this oft recorded masterpiece?; do we actually need any more recordings?

Arguably one might have said "do we need any more?" after Klemperer.

Even with Fischer at the helm and my 'fanboy' complex, I am hesitant although he can be relied upon to offer us an altogether different perspective. Sarah Connolly is a family favourite and a local 'gal' - one of our own! ;-) - so that version has appeal as well.

Hopefully Graham you will get a chance to review these new entries?

As for the PCM comment, presumably it is down to the recording rigs at the venue over which Pentatone may have little control. As long as they do not insult us with 96kHz sampling it'll be OK-enough.

I recorded the Mahler Das Lied in 2017.. It was our intention to release this at the beginning of 2020 to correspond with the Mahler Festival to take place in Amsterdam when The Budapest Festival Orchestra was to close the Festival with this Mahler. Unfortunately because of Corona it was cancelled. We changed the release to now... not knowing of the other releases (including the same singer Robert Dean Smith who recorded the same with pentatone a year later!)

I concur with Hiredfox I have only two go to recordings of this work the Klemmperer as mentioned and Bernstein with the New York ............and actually I think Bernstein has the lead !

I don't think we can have too much Mahler. I am looking forward to hearing both of the new recordings. I like Robert Dean Smith and love both Sarah Connolly and Gerhild Romberger, so the competing mezzos will be a treat! I already purchased DSFs of the Fischer recording from NativeDSD, but haven't gotten to listening to it yet.

Smith appearing on both recordings kind of reminds me of how James Morris was recording Wotan with James Levine and Bernard Haitink at about the same time.

(I think the only thing we have too much of is Beethoven's Cello Sonatas; there have to be about two dozen complete sets available in some form of HD. Basta!) 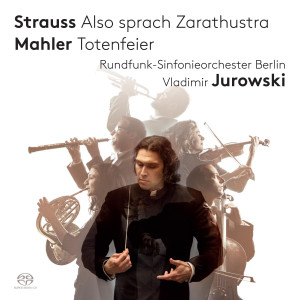