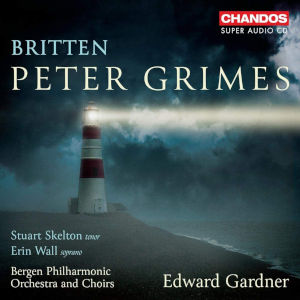 
'The burly Aussie tenor is now even more identified with this ill-fated protagonist than Peter Pears, the first Grimes. And everywhere Skelton has sung the part, whether at English National Opera, the Proms, the Edinburgh festival or now on this international tour of a concert staging mounted by the Bergen Philharmonic, the conductor has been Edward Gardner. Theirs is one of the great musical partnerships, and they continue to find compelling new depths in this tragic masterpiece.’ – Richard Morrison – The Times

This studio recording was made following the acclaimed production at Grieghallen, in Bergen, in 2019 (repeated in Oslo and London and reviewed above). Luxuriant playing from the Bergen Philharmonic and a stellar cast under the assured direction of Edward Gardner make this a recording to treasure.

Just finished listening to this and...it's not good. Well recorded and well sung, but boring. One of their selling points is that they did a bunch of performances live and the recording is based on those, but there is so little drama and tension. Everybody sounds bored, just as I was. This is surprising because there are so many great British character singers here and nobody makes an impression, except perhaps James Gilchrist as the Rector (fun luxury casting since Gilchrist has made various Evangelists from Bach's Passions a specialty for many years now.) Stuart Skelton does some lovely things vocally as Grimes, but so did many of his predecessors. He makes no dramatic impact at all and has difficulties with some of the high notes, either going flat or into falsetto. This does not replace Britten's original set (with Peter Pears), Colin Davis' searing recording (with Jon Vickers) and Richard Hickox's (with Philip Langridge, also on Chandos.) So disappointing.

As always, room for different opinions - the U K Gaurdian review of this set is headed, "Peter Grimes review – insightful recording is among the opera’s finest". I wonder if any of our in-house reviewers is listening to this and could share at least some early, informal thoughts?