Thanks Adrian. My mistake thinking everything got ported over to the new site. Quite a lot of very exciting comments, especially by Lindberg. I guess I'll need to check SA-CD ...

Mahler is one of the warhorses of the super audio community. Few will have only one recording of any of the symphonies. If I’m the average, then many will have three or more of each. The point of saturation has long passed. Do we need one more? It depends what for.

From 1883 till 1885 the young German conductor, Gustav Mahler, served in the German city of Kassel, as Musical and Choral Director at the Royal Theatre. Perhaps not a big deal, but sufficiently so for Adam Fisher, in 1989 the city’s General Music Director, to suggest the idea of holding at regular intervals a ‘Gustav Mahler Fest Kassel’. Though this didn’t last for long (only three editions were held), Kassel remained, for promotional purposes no doubt, ‘The City of Mahler’.

This release of the second symphony is also the second in a series (?) of recordings made during those festivals. It should, therefore, not be taken as an addition to the Mahler catalogue, but more as a commemorative release in the context of Kassel ‘The City of Mahler’. In that light, it may have an appeal to Mahler collectors and, of course, visitors to Kassel, where Mahler is regularly programmed on the City’s State Symphony’s concert season.

It should be noted that Mahler symphonies require a complement that goes far beyond what regional orchestras can muster. For these concerts, the local band had to be reinforced by musicians from notably the Vienna Philharmonic (including its Konzertmeister, Reiner Hocke), the Vienna Symphony, the Staatskapelle Dresden, the Royal Concertgebouw Orchestra, Amsterdam, and many other prominent European Orchestras, and garnished with the rather elaborate title of Festspielorchester des “Gustav Mahler Fest Kassel“. Together with top soloists Ibolya Verebics (Soprano), and Marilyn Horne (Alto), and the Berlin Rundfunkchor, Adam Fisher had all the musical ingredients at his disposal to impress the audience during this 1991 live performance.

In musical terms, we have here a reading that can measure up to the required standard, and even more so, when taking into account the ad-hoc character of the formation, recruited from different backgrounds and orchestral styles. As for the soloists, I found the contribution of the American mezzo-soprano, Marilyn Horne, in ‘Uhrlicht’ profoundly imposing.

Naturally, the sound is a different matter. It would have been instructive if the liner notes had given some information to that effect. The original tapes were made by engineers Bentzing/Packeisen/Ebel, whilst the restoration was done by Holger Siedler, so it says in the ‘ímpressum’. Why, I ask myself, was that necessary? Was there a problem with the (older) tapes? If so, one can only admire the SACD mastering, undertaken ‘in house’ by ARS Produktion’s sound engineer, Manfred Schumacher. The result is remarkable but, according to modern standards and as to be expected, not exceptional, based on recording techniques from the early 90-ies.

But what is, though, is that the symphony is recorded on one disc. All 82 minutes and 12 seconds! And unlike most Hi-Res re-mastered SACD’s from older sources, ARS Produktion have added surround channels. The result may not be entirely to the liking of those who want ‘ambiance’ only, as the listener is put in the middle of the action. In that case, I recommend listening in Stereo, what many do anyway.

Mixed feelings? Not so, I suspect, for those who were there, love Kassel, and the ‘Mahler label’ attached to this historic city in central Germany. It is not meant to replace your cherished favourtites.

Thanks Adrian for your review and the insight it brings into the origins of this recording. One point of any review is to inform sufficiently for others to make their own judgement on a purchasing decision. In this respect your review has succeeded perfectly. Any ARS Production recording is worth considering for the recording quality alone but the implication of a lacklustre recording and the ad-hoc nature of the event and musicians suggests this newly released 'Resurrection' will have limited appeal.

Not for me although I won't mark it down for obvious reasons. 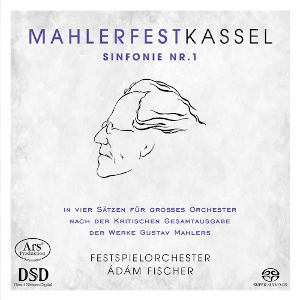