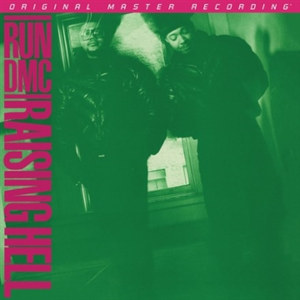 Run-D.M.C.'s Raising Hell remains the turning point at which hip-hop crashed through mainstream barriers and never left. Anchored by the crossover smash "Walk This Way," the 1986 blockbuster still sounds like a revolution unfolding in real time. It has everything – hard-rock riffs, turntable scratching, itchy rhythms, hit singles – not the least of which are the trio's invigorating raps and inseparable chemistry. And now it's the first rap record afforded audiophile treatment, courtesy of Mobile Fidelity's simply illin' edition.

Mastered from the original master tapes and limited to 2,000 copies, the unsurpassed reissue label's hybrid SACD elevates Raising Hell to sonic heights on par with its musical and cultural significance. Ranked the 123rd Greatest Album of All Time by Rolling Stone, 43rd on Pitchfork's Greatest Albums of the 1980s, one of the Top 100 Albums of All Time by TIME – and included on "Best of" lists by Spin, Paste, XXL, Entertainment Weekly, and basically every other significant media outlet – the triple-platinum effort rocks the house.

Afforded deserved dynamics and clarity, Raising Hell unleashes a torrent of massive dynamics and tsunami of frequency-plumbing details underlined by Rick Rubin's taut, crisp, albeit raw and streetwise production. Just as the Queens-based group both defined what hip-hop could represent – and displayed just how big it could get – Rubin's work melded ear-worm hooks, savvy drum loops, metal-leaning guitars, and, of course, Run and D.M.C.'s cross-fire lyrical interplay into watertight frameworks bursting with ideas, tones, samples, and beats. Heard anew on Mobile Fidelity SACD, Raising Hell is in every regard the aural equivalent of a direct-to-console 1970s classic. And it sounds as fresh as hell.

As for the music, it ranks among the most influential, inventive, and invigorating ever released – rap or otherwise. Vanguard artists such as Ice-T, Eminem, Jay-Z, and Public Enemy's Chuck D – who declared it his all-time favorite and "the first record that made me realize this was an album-oriented genre" – have testified on behalf of its brilliance. And never mind the presence of the Top 5 single "Walk This Way," whose power helped make Aerosmith's Steven Tyler and Joe Perry relevant for the first time in nearly a decade – and literally put Run-D.M.C. in bedrooms ranging from the Bronx to Bartlett to Bad Axe.

Look instead to the rest of the entirely filler-free set, be it the corkscrew turns, slippery wordplay, and "My Sharona"-meets-"Mickey" mixology of the boisterous "It's Tricky," the fat-but-minimized bass grooves and warped turntable wobble of the hysterical "You Be Illin'," chimes-accented inertia and boombox-on-shoulder thunder of the now-iconic "Peter Piper," or voice-as-percussion attack of the funky "Is It Live." With Raising Hell, the answer to the question is always affirmative – a sensation bolstered by the fact the group always had something to say.

The definition of Golden Age Hip-Hop in every way, Run-D.M.C. avoids the negativity and misogyny that later plagued the style, spinning assertive tales about identity (the biographical and culture-changing "My Adidas"), work ethics ("Perfection"), and, most notably, pride (the Harriet Tubman- and Malcom X.-referencing "Proud to Be Black"). Pavement-packed inner cities, tree-lined suburbs, and cornfield-rimmed rural areas would never again be the same. And rocking a rhyme that's right on time would become trickier than ever.

An Accuphase that a friend of mine tested my two discs of this title on has reported that both disks played fine.

MoFi will be contacted and I will let you know the outcome.

"We are sorry to hear of the trouble, Kevin. This isn’t something I hear of often, but it does happen from time to time. Unfortunately, it is not possible for me to determine what the cause of the problem is without having access to the disc and player you are using. We normally suggest testing the disc in another SACD player, if possible. Which you have done, your player itself may be having an issue with the disc."

In my case other SACD's I have subsequently tried have played as they usually do - So this disk is different to other SACDs in some (albeit small) technical way and in the case of some players, different enough for the player not to be able to play it.

Have now had a new laser assembly installed and the disk plays perfectly.

I'm told by the tech that the gold opaque layer that the laser has to shine through to get to the SACD layer on the bottom can (micro) vary in its opacity on some disks. If the laser weakens with age the disk will ultimately not be able to be read the very slightly less opaque disks first.

There has been a repress of this disk - So if you are after this disk, get one out of the repressed run.

How does it sound?

Quite good really. For one, the compression of the remastered CD has been banished.......as have the 'bonus' tracks!

The Fidelity of a couple of the tracks are a little less than the rest and partly because of the sample based construction of the album the overall fidelity is not super high, but it does sound good. It is very much an artificial sound confection. So don't expect too much in the sound stage department, though instrument separation is quite good.

It is much less harsh than the CD and warmer, more detailed and analogue sounding too. As a result the enjoyment of the band as they go about their vocal business is palpable.

An excellent album from Raps formative years, before the genre turned very dark and thuggish. If you quite like the Beastie Boys you will also like this album. The RUN DMC crew were clearly a huge influence on their sound and attitude.