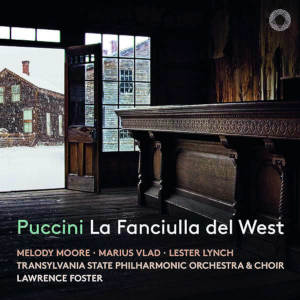 Lawrence Foster conducts Puccini’s La Fanciulla del West (1910), together with the Transylvania State Philharmonic Orchestra and Choir, Cluj-Napoca and a cast of seasoned Puccini singers, including Melody Moore (Minnie), Marius Vlad (Dick Johnson) and Lester Lynch (Jack Rance). Puccini’s “Spaghetti Western” is not only an exploration of the New World, with the delightfully charismatic saloon owner Minnie running the show, but equally of new music; a pioneering work full of harmonic innovation and state-of-the-art orchestration effects. The depth of the orchestration, as well as of the various ensemble scenes that are characteristic of the opera, fully comes to life in this studio recording.

Lawrence Foster has a vast PENTATONE discography, including operettas and operas such as Johann Strauss’s Die Fledermaus (2018) and Der Zigeunerbaron (2016), as well as Verdi’s Otello (2017). The latter album features Melody Moore and Lester Lynch, who have also starred in recordings of Mascagni’s Cavalleria rusticana and Puccini’s Il Tabarro (both 2020). Marius Vlad and the Transylvania State Philharmonic and Choir, Cluj Navoca make their PENTATONE debut.