This is the complete orchestral recordings on DG by Böhm on 70 Cds. if I understand it correctly only the Mozart symphonies are on Blu-5rqy.

@hiredfox I am not talking about my system setup or the function of the rear speakers, which I am fully aware. I just compared the three recordings regarding the sound of the ... 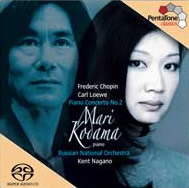 This is an interesting coupling of two romantic piano concertos. The Chopin is familiar through countless versions whereas the Loewe was previously unknown (at least to me).

Maria Kodema’s account of the Chopin begins with a finely played orchestral introduction by the Russian National Orchestra, with no sense of routine. I particularly liked the clear bass lines here. When the soloist enters one is aware that the piano is quite closely balanced, but not so much as to hide the excellent woodwind solos including a nice woody sounding bassoon. Overall I found Maria Kodema’s playing to be sensitive and poetic without perhaps showing the imagination of say Rubinstein (now available in the Living Stereo series) or the distinctiveness of Zimerman in his (second) version on DGG.

The first movement of the Loewe begins somewhat disconcertingly with the conductor (?) vocalising the rhythm (dah dah da dah) of the opening theme, but it does not disturb for too long. In this tuneful work the piano is kept busy most of the time with passage-work and the orchestra is relegated to a supportive role.

The delightful slow movement begins with a piano solo that sounds like the introduction to a song. It is subtitled ‘Espaniola’ but it does not sound particularly Spanish. If Rossini had written a piano concerto then this movement could be from it.

The lively rondo finale completes what is a thoroughly entertaining work, and even if it is not a forgotten masterpiece, I cannot imagine it being played better than on this disc. Anyone who has been collecting Hyperion’s ‘The Romantic Piano Concerto’ series on RBCD will not fail to enjoy this piece.

The 5.0 multi-channel DSD recordings of both works is splendid, and Erdo Groot has captured both the acoustic of the Moscow Conservatory and the characterful playing of the orchestra with his usual skill.

Worth buying especially for the Loewe.