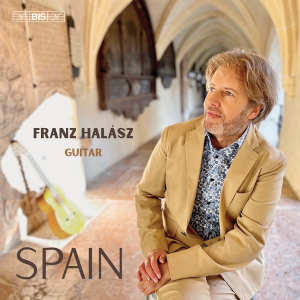 
In June of 1922, a cultural fiesta took place on the grounds of Granada's Alhambra palace, organized by Manuel de Falla and Federico García Lorca. The aim of the event was to preserve the 'purity' of flamenco art and the opening performance was given by 29-year-old guitarist Andrés Segovia. Ironically, Segovia played de Falla's Hommage to Claude Debussy (featured on this disc) - a work which can hardly be described as pure flamenco. But this can be seen as symptomatic of an important trait in the music of 20th-century Spain: Certain composers defended what they believed to be a noble, gallant and Castilian ideal, while others embarked on an quest to restore the 'lost purity' of the peasantry, but embracing Modernism and Impressionism as stylistic tools in order to do so.

This is demonstrated on Franz Halász's new disc, which provides a context - Milán's Pavanes from the 16thcentury, Fernando Sor's 'Malbroug' Variations from 1827 - while juxtaposing later works that embody the described, conflicting attitudes. This makes for a colorful and varied program, taking in highlights in the guitar literature such as Tárrega's Recuerdos de la Alhambra as well as Joaquín Turina's Guitar Sonata, here recorded - for the first time - from a copy of Turina's original manuscript, and not Segovia's published version with numerous changes.

The winner of a Latin Grammy, Franz Halász is a highly acclaimed guitarist who here also makes his own contribution to the repertoire of his instrument, with his own arrangements of de Falla and Isaac Albéniz.

I think you'll find the DSD logo on most SACD discs and back covers, and all it's referring to is the delivery format, not the recording format. Many labels unfortunately have not documented the latter anywhere in the packaging.

BIS do all of their recordings in PCM. This is discussed on their website: https://bis.se/super-audio-cd (in the footnote). In this case, DSD only refers to how the music was encoded on the SACD layer, as Tony Reif wrote.

Like many people, I wish the DSD logo were reserved for recordings that are DSD through and through. However, the business has let the DSD logo get cheapened. I don't blame companies like BIS for recording in high-resolution PCM. It's easier and, when done well, usually gives excellent results. But it is difficult for buyers to know how a particular recording was made when the logos don't really mean much.

The BIS recordings of Franz Halász and of the duo Débora and Franz Halász, were produced by the artists. Although these albums were not recorded by BIS's usual engineers, they have fine sound quality and outstanding performances.