Everett Porter has communicated on here quite frequently in the past. Polyhymnia - his parent company - has made the RCO recordings from the inception of their own label and ... 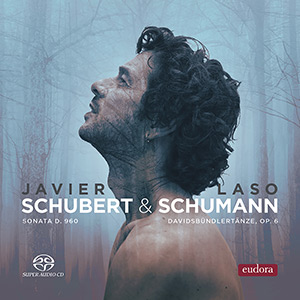 Eudora Records is thrilled to welcome Javier Laso to the label. As the great pianist Josep Colom states in the accompanying liner notes, “Javier Laso is inspired”, for “he connects directly with the music, a music which shows us a mysterious place which extends beyond the vicissitudes of life and only a performer who sees that place can reveal it to us.”

The programme is a marvelous musical coupling: Schubert’s overwhelmingly moving last Piano Sonata D.960, written just a few weeks before his premature death, and Schumann’s Davidsbündlertänze op. 6, a Romantic and contrasting struggle between the two sides of the composer’s own musical and personal nature. Javier Laso’s rare and inspiring talent is in display in those passionate and insightful performances.
Works (2)

Searching on the internet for the best interpreters of Schubert’s late sonatas, one invariably ends up with the usual suspects of which most are no longer among us. Moreover, pianists from some countries don’t seem to be presented at all, like for instance Spain. Does Spain not have any pianists of note? Reality often speaks a different language. I remember having made a similar remark about Josep Colom and his remarkable, very personal interpretation of Beethoven's last three sonatas (reviewed in May last year).

Schubert’s Sonata D960 poses a lot of challenges for any interpreter. And not only because it is the longest of them all. In that respect, Rian de Waal, a Dutch piano talent, who died much too young, and whose reading I selected for comparison, said, referring to this sonata: ”Take your time with Schubert”. Why? The immensity of Schubert’s final piano composition spans some 45 minutes. A long route indeed with pitfalls at almost every turn. And not least the concern on how to keep the listener spellbound from A to Z. Some pianists ‘cheat’ by omitting repeats. And not just the inexperienced ones. In his 1989 reading (Philips) Alfred Brendel cut the first movement short from 22 to just under 15 minutes. (He does, of course, remain one of the finer interpreters with his own special style but is certainly not the only one as seasoned Schubertians will tell).

Swiss-born, but otherwise Spain ‘grown’ pianist, Javier Laso, picked up the gauntlet and the result of his reading of Sonata No. 21 is here. His timings correspond with those of de Waal’s. But that is only part of the story. Playing Schubert’s final sonatas are very demanding in terms of understanding the varying moods and handling of the score. It is not just a matter of notes and markings. It’s the subtleties, the shading, phrasing, and colouring, together with the choices of handling of the pedals that make things complicated. Interpreters and scholars do not agree on any of them. Following Laso’s friend and first-rate Spanish pianist, Josep Colom’s advice, it probably makes sense to approach each reading as though it is a first-time hearing. Based on Colom’s recommending notes, listeners new to this sonata will find much to admire in Laso’s reading.

The first movement unfolds at a leisurely pace, hurdles taken with ease, repeats observed, and, perhaps the most difficult part, coherence maintained throughout. But the heart of the matter goes deeper. We mustn't forget that Schubert finished this sonata less than 2 months before his death. Notwithstanding the often factual if not clinical technical descriptions in professional handbooks, we may assume that this final major composition ought to be taken as a kind of testament, the apotheoses of all his spiritual craftsmanship, the Lieder, and the highs and the lows of his existence. Notably, the plaintive second movement marks elements of Schubert’s inner struggle, whereas the positive scherzo fits in as part of a singing testament, but with an awkward short-lived 4 minutes only. Both performed by Laso with precision and pianistic honesty.

Like the first, it is the final movement that can make or break any performance. The final surge of a candle about to lose its ultimate breath demands every bit of expressiveness a performer can muster. The best readings usually come from elderly, mature Schubertians, and sometimes even with or after their second recording. Laso may not be there yet, though I find his interpretation effective, close to the score, whilst displaying plenty of personal conviction. Besides, he has the advantage of being recorded at a level practically none of the yesteryear’s artists can, even in ‘remastered’ format, match.

Javier Laso finishes with dances of the ‘League of David’, a society created by Schumann, with an existence between reality and fiction. His ‘borrowed’ personalities Florestan, the tempestuous, and Eusebius, the melancholic poet, symbolizing his alter egos, are members. In Davidsbündlertänze, which are, by the way, not dances but rather a suite of 18 character pieces, composed much later in his career than the Opus number (6) suggests, Schumann lets these alter egos interchange in complex dialogue to express his feelings with a view to marrying 16-year-old Clara Wieck against the wish of her father.

At first glance, simple melodies, but difficult to play and difficult to interpret. Schumann did give detailed descriptions about tempi etc. but if, as some scholars say, it must be seen as a ‘self-portrait’, or even heralding his mental illness, emotional aspects need to be addressed adequately. Furthermore, some simple questions remain like how to play and distinguish between ‘with humour’ or ‘with good humour’. Here, too, In Josep Colom advice in his recommendation to listen without any prejudice. If followed, the personal views of the player will be the determining factor. Rather than seeking the precarious path of dualistic reasoning between the of the one or the other ego, Laso seems to prefer a more straightforward road; getting out the beauty and the inventions of the scoring. Seen in that perspective I’m sure that those listening with an open mind, will agree that Laso’s view is as good as any other qualified interpreter with a fresh look.

With this release, Javier Laso enters into fierce competition with a limited field of confirmed Schubertians. He shows himself to be a competent player, knowing how to connect with the music. I’m convinced he is well underway to further mature into becoming one of the few top contenders.

Be that as it may, Javier Laso’s debut release with Eudora records is crowned with a most respectable reading of Schumann’s Davidsbündlertänze at par with other available prime choices, but recorded at the best possible resolution in decent surround, thanks to the engineering wizardry of Gonzalo Noqué.