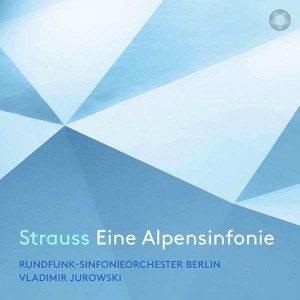 Vladimir Jurowski and the Rundfunk-Sinfonieorchester continue their PENTATONE journey through the heights of German late-Romantic repertoire with a recording of Richard Strauss’s Eine Alpensinfonie. The Alpine Symphony was inspired by the composer’s experiences during a mountain trail, and is an audience favourite thanks to its picturesque, idyllic charm and powerfully evocative score. To Jurowski, the attraction of this piece lies not so much in the picturesque, but rather in Strauss’s Nietzschean embrace of living in the now and the transformative power of being in complete harmony with sublime nature. In that respect, this album shares a kinship not only with Jurowski’s previous recording of Strauss’s Also Sprach Zarathustra (2017), but equally with his acclaimed interpretation of Mahler’s Das Lied von der Erde (2020), in which he also recognizes a composer coming to terms with the mortality of man while celebrating the immortal nature of Life. Seen in this light, Strauss’s Alpine Symphony becomes much more than just an exquisitely scored postcard.

The Rundfunk-Sinfonieorchester Berlin has a vast PENTATONE discography. Together with their chief conductor and artistic director Vladimir Jurowski, they have recorded Mahler’s Das Lied von der Erde (2020), symphonic works from Mahler and Strauss (2017), violin concertos by Britten and Hindemith together with Arabella Steinbacher (2017), and Schnittke’s Third Symphony (2015).

So disappointing that this is a PCM recording. Venue limitations presumably. Sorry Pentatone but I'll skip this one.

I think your assumption is somewhat flattering to Pentatone whose values seem to have undergone a sea change of late. DSD and SACD seem to have been brushed aside in favour of (no doubt cheaper) PCM and RBCD. Nowhere better indicated than in the forthcoming release of Steinbacher's second Mozart concerto disc - the first one was DSD / SACD. The new one features the same soloist, accompanists and venue but is being issued, like Kozena's newest disc, as PCM /RBCD. Several other major artists' latest issues have also been RBCD. They have also been discounting their physical back catalogue frighteningly for nearly a year now, no doubt to turn an asset into hard cash in these challenging times, but perhaps also betraying the new management's preference for downloading / streaming. Though I'll never be doing that at my age, it's easy to see the attraction for any record company these days - no manufacturing costs, no inventory issues, no warehousing and greatly reduced distribution costs, and of course the end of the pre-owned market to take the edge off future potential sales! I think for us Pentatone is now a dead duck; what a shame for the high standards with which the original team set up the business.

I am prepared to give Pentatone the benefit of the doubt. The last 18 months has been a nightmare for everyone. No doubt Pentatone have had to compromise their normal high standards just to ensure that a few new recordings could be made and the business kept ticking over.

With severe limitations on travel, moving equipment around from country to country and lockdowns that probably has translated into having to use any in-house recording facilities at available and accessible recording venues.

Better to judge their future intent in a year's time when all of this disruption might be better managed at government and local levels. In the meantime we should keep buying SACD just to provide them with an income stream and help secure their future. We as a community are part of this solution.

I think you are being optimistic John.

Since Pentatone has moved to becoming an artist rather than a repertoire focused label they have also subtly moved from SACD to RBCD as breydon-music states. The third and latest release in the Rene Jacobs Schubert cycle is RBCD (PCM) not SACD (DSD) unlike the previous two issues. They also seem to have side-lined, to some extent, the Polyhymnia engineers whose superb recordings made the label the audiophile choice for many.

The Alpine Symphony is a very good performance, but the sound (PCM) is no match for that on many other competing versions. Presumably it was to please their new star conductor Vladimir Jurowski that this was released, since Pentatone already have no less than two versions of the work in their catalogue from Orozco_Estrada (PCM) and Janowski (DSD) the latter including as a fill-up of Strauss's Macbeth.

I'm with Hired Fox on this one.
Perhaps people here have forgotten Bissie's comments several years ago on the old forum about Pentatone. Much of the initial management retired and the label only continued thanks to the input of Getty money. At that time there was also a shift in focus in what was recorded and released. And now in the past year or two there has been a shift to the Channel model of releases, rbcd discs and downloads, with only a some select sacd disc releases.
Since there is little to no industry commenting anymore, we don't get industry insights as in the past.

Pentatone have now signed up the Czech Philharmonic Orchestra. The label's web page https://www.pentatonemusic.com/product/mahler-symphony-no-4-3/ reveals that the first physical release (Mahler 4, Bychkov/CPO/Reiss) will be in RBCD format. Audite also seem to have abandoned SACD. It may be time to concede that SACD is a dying format and to prepare ourselves for the age of downloading.

Pentatone's survival as a recording company could not possibly depend upon a switch back to the RBCD format!

Many casual buyers have abandoned physical optical disc altogether; if there are no longer enough SACD sales to sustain the business Pentatone would have to put all their eggs in the streaming / downloading markets. Even then it is doubtful that enough people are prepared to buy downloads to run a business, streaming has become the de facto main method of consuming music for most consumers.

hiredfox, I noticed PentaTone does now have download-only releases. For example, their new album of songs, "How Do I Find You" by Sasha Cooke, is download only. (Sasha Cooke is a marvelous singer, btw.)

I also noticed in PentaTone's announcement that they will record all Mahler Symphonies with the Czech Philharmonic, they say it's the first Mahler cycle since Vaclav Neumann's set in the 1970s-80s. They are *almost* correct. Exton almost completed two cycles with the Czech Philharmonic since then. Vaclav Neumann sadly died before recording Nos. 7 + 8 (a superb set). And then Zdenec Macal recorded another superb cycle that was only short No. 8. (It's odd that Macal's cycle stopped just one Symphony short. Anybody know why?)

Another blow to SACD?

Myrios tells me that Sonopress in Germany no longer does SACD. The projected Myrios Bruckner cycle with François-Xavier Roth will therefore not be released in physical Super Audio format; RBCD only. BTW Pentatone uses or used Sonopress for manufacturing SACD.

Sonopress can still do SACD but due to technical problems no longer double-layer CD/SACD. Labels will have to accept that henceforth there will be two discs in one jewel box, one single layer SACD, and one RBCD of the same.

Sony is still operational and ARS Produktion inform me that they will now switch to the (more expensive) Sony plant in Austria.

Sales are falling (and downloads too, so it seems). Sony may continue for another 5 years.

"Sonopress can still do SACD but due to technical problems no longer double-layer CD/SACD. Labels will have to accept that henceforth there will be two discs in one jewel box, one single layer SACD, and one RBCD of the same."

This could be a great shift, really. Who cares about RBCD layer when buying SACDs?

Single-layer makes sense for SACD reissues of classic recordings, but it's not so benign for new releases - a big advantage of hybrids is that they avoid a dual inventory situation. I hope labels putting out new releases will stick with hybrids.

Pentatone, please comment on your companies plans for the future regarding SACD

A week ago I put the question to Herr Pollmayer, Vice President Sales at Sonopress. So far, he did not choose to answer.

We are not direct customers of the disc manufacturers never-the-less they are part of an industry that relies on us to buy and recommend their products so you wold have thought that would have a little more skill at the customer interface.

If this were recorded in at least 5 channel DSD then I would have rushed to buy it. Otherwise PHOOIE