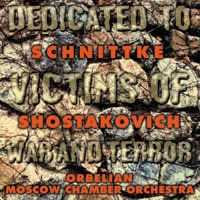 "Dedicated to Victims of War and Terror" Shostakovich: Chamber Symphony, Schnittke: Concerto for Piano and Strings

Constantine Orbelian, the conductor on this SACD, has dedicated these recordings to the memory of his grandparents, one of whom was murdered in the Stalinist purges of 1936 and the other who, from 1938, spent ten years in the GULAG prisons of the USSR.

The first item is Rudolf Barshai’s familiar transcription of the Shostakovich 10th String Quartet (dedicated to the Memory of the Victims of War and Fascism). It is played here with a tremendous intensity emphasised by the close and rather dry recording. There is an impressive attack and bite from the strings of the Moscow Chamber Orchestra in the two fast movements (II and III) that further emphasises the searing quality and sardonic humour of the music.

Schnittke’s Concerto for Piano and Strings is an even more anguished work. Written in 1979 for the pianist Vladimir Krainev, it is composed in a single movement, but Delos have given us five track points to identify changes in the musical narrative. Anyone familiar with Schnittke’s compositional style and technique will not be surprised by the wide-ranging moods of this concerto. It encompasses quiet meditative piano solos, jazzy moments (try track7), evocations of the sounds of pealing bells and passages of almost overwhelming power and dissonance as well as many of haunting beauty. It is certainly not an easy piece to assimilate, but having listened to this recording many times over the past two years, I find the music becomes more and more rewarding with each hearing.

Both works were recorded in March 2000 at Skywalker Sound, California. To my ears, the acoustic is somewhat airless and claustrophobic, but the sound certainly has impact and the solo piano is realistic and well balanced with the strings.