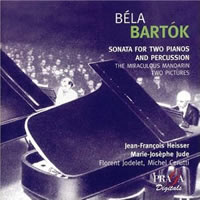 
Three different aspects of Bartok's both aesthetics and ethics in a programme which is totally original for two pianos : - exquisite "watercolors" in the Images which constitute a sort of second suite for piano duo, - expressionist tale, almost autobiographical, in the Mandarin, where the use of the two keyboards deprives the music of its oriental magnificence but enhances the violence of the story and the character almost religious of the final suicide of all creative genius, - sovereign balance of the last Sonata, between unbearable anguish and radiating remembrances, with its central nocturnal music which reveals a world of cries, inintelligible snarls and excitements of undestroyable vitality.