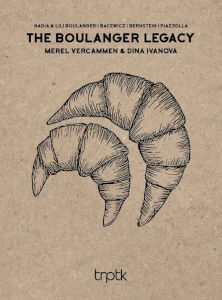 
That Merel Vercammen is constantly looking for new challenges is something she proves with her new TRPTK production, The Boulanger Legacy, a thematically curated album in which the music of Nadia Boulanger (1887-1979) and her students are the common thread. “Her influence on the music of the twentieth century has been gigantic,” Vercammen says. The school, of which she would become director in Fontainebleau, attracted many American music students. Various names such as Aaron Copland, Jean Françaix, Philip Glass, Daniel Barenboim, Elliott Carter and Quincy Jones took lessons from her. Referring to her surname, there was talk of the “boulangerie,” as if she delivered composers like loaves of bread. The album includes works by her sister Lili Boulanger, Grażyna Bacewicz, Leonard Bernstein and Astor Piazzolla.

The three pieces by the young Lili Boulanger (1893-1918) that she wrote for violin and piano are included, with the expressive D’un matin de printemps (1917) standing out in particular. The Polish Grażyna Bacewicz (1909-1969) enjoys great fame in her native country and is represented on the album with her beautiful Sonata no. 3 for violin & piano (1948). An early, modernist work by Leonard Bernstein (1918-1990) is included: the Sonata for violin and piano (1979): a series of variations in which he plays with form.

Additional color to this album is Le Grand Tango (1982) by the Argentine Astor Piazzolla (1921-1992), born 100 years ago, a piece he originally dedicated to the great cellist Mstislav Rostropovich. Composer Sofia Gubaidulina made an arrangement of it for violin and piano. Vercammen and pianist Ivanova seem to step outside themselves for a moment in their special performance: like no other, the duo lets the energy of the tango speak for itself! “We really had to make those rhythms our own,” Vercammen remarks.

The carefully constructed album concludes with the first movement, ‘Modéré’, from Nadia Boulanger’s Trois pièces. Melancholic music originally written for piano and cello, but suited with a violin part by Vercammen.

My search for music by "new to me" composers led me to Lili Boulanger and this album. Her story is both fascinating and sad. I would highly encourage members to watch a newly released YouTube biography by "Inside The Score". https://www.youtube.com/watch?v=FrFIohURbi4

A few of her compositions are on this album. I will add comments after some careful listening. I do, however, want to highlight her composition that won the "Prix De Rome" at age 19. Boulanger: Faust et Hélène, available from Chandos (9745). Unfortunately, it is only available on RBCD. The included booklet is an in depth look at her compositions on the album and includes the lyrics. I found the music engaging, the singing is superb. There is a YouTube video of the music by the Royal Stockholm Philharmonic Orchestra, posted 1/21/20. https://www.youtube.com/watch?v=APNixVdQycI

I do hope that more of her works will show up on SACD.

Ordinarily, I am not a fan of violin and piano music. In the case of this album, especially because I have become very enamored with Lili Boulanger's works, I listened to the previews and downloaded the album in DXD (24/352.8) surround. No regrets. I've listened to it a few times now and can attest to the superb playing of each selection. TRPTK again works its magic producing a wonderful sound that puts the performers in my Livingroom.

Dina Ivanova, piano and Merel Vercammen, violin, talk about "crowdfunding" this album and their musical selection in this YouTube video: https://www.youtube.com/watch?v=Q3q8RCGzuiM

You'll immediately recognize the style of Grażyna Bacewicz's "Sonata No. 3 for violin and piano", and Astor Piazzolla's "Le Grand Tango". I was not familiar with Leonard Bernstein's "Sonata for Violin and Piano" with several variations. All of these pieces were very enjoyable. But, the star for me was the three Lili Boulanger tracks, "Nocturne", "Cortege" and especially "D'un matin de printemps". If you know her life story you will understand why there are "dark" moments in each piece. It's a sudden mood switch. I found it intriguing and quite interesting. Ending the album is a piece, "Trois pieces" by Lili's older sister, Nadia Boulanger, very famous in her own right.

Sonically, Chief Engineer Brendon Heinst gets better and better. The sound is full and rich, as if there are more instruments than just the violin and piano. All in all, I was very impressed with the album. The high rez version sounds much better than when I sampled the tracks.