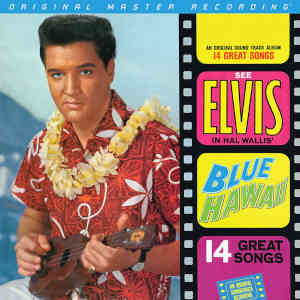 
The old adage about Elvis Presley is that his soundtrack work never held a candle next to his studio albums. Though true for a majority of his film-related outings, the traditional notion is forever disproved by his Blue Hawaii set. Originally released in 1961 in support of the film in which he starred, the triple-platinum LP spent nearly five months at the top of the Billboard album charts; outsold his two prior studio efforts; and ultimately, remains the second-best-selling soundtrack of the musical-dominant 1960s. And now, it has received sonic treatment befitting rock royalty.

Mastered from the original master tapes and limited to 3,000 numbered copies, Mobile Fidelity's hybrid SACD of Blue Hawaii transports listeners to both the carefree innocent escapism of the early ‘60s and calming, breezy atmospherics of the famous Pacific Islands. If you've ever wondered what it might be like to have Presley inhabit your room, this collectible reissue makes it happen via lifelike presence, clarity, immediacy, and transparency.

Recorded before the King started to burn out on soundtracks and go into a creative tailspin, Blue Hawaii presents him in tremendous voice. The newly uncovered layers of detail, body, emotionalism, and tonality on this SACD bring that treasured element – as well as the brilliance of the arrangements and accompaniment – to light like never before. Presley's warm crooning alone warrants unmitigated attention. It's not for nothing that this record – replete with panache, whimsy, romance, and seriousness – forever altered the course of his career.

Much like the film itself, the music on Blue Hawaii subscribes to a feel-good aesthetic. Presley plunges into a stylistic deep end with equal parts fearlessness and fun. He delves into early rock ‘n' roll ("Rock-A-Hula Baby"); touching balladry ("Hawaiian Wedding Song"); playful rumba ("Beach Boy Blues"); relaxing luaus ("Hawaiian Sunset"); and naturally, island-inspired fare ("Ku-U-I-Po"). It becomes immediately evident that the King is enjoying himself and committed to the mission. Is Blue Hawaii all serious art? No, but it was never intended to be. Rather, it serves as a showcase of Presley's outgoing personality and chameleon-like ability – like that of Frank Sinatra – to inhabit different roles and entertain.

Of course, Blue Hawaii remains timeless for another reason: The inclusion of the timeless, gorgeous, and still-untouchable staple "Can't Help Falling in Love." Penned by Hugo Peretti, Luigi Creatore, and George David Weiss, the love song quickly transformed into an international standard – with Presley's definitive version hitting No. 2 on the charts and ultimately becoming the closing song to his concerts. Ranked among the 500 Greatest Songs of All Time by Rolling Stone, its conviction, sentiment, and depth testify on behalf of why Presley still reigns as the King.

However subtly, the staple also underscores another reason Blue Hawaii should never be overlooked in Presley's canon: the ace musicians involved in its creation. Guitarists Scotty Moore and Hank Garland; drummer D.J. Fontana; percussionist Hal Blaine; pianist Floyd Cramer; bassist Bob Moore; and iconic gospel backing vocalists the Jordanaires all contribute masterful performances. Hearing them with such expressiveness, openness, and realism on this SACD should forever alter how Presley's 1961 soundtrack – the finest of his career – is viewed. As he sings in the title track, dreams come true, indeed.

I'm putting my comment here because this happens to be a recent Mobile Fidelity release. The comment is not about this particular disc but about Mo-Fi in general.

The world of vinyl is in an uproar at the moment because of this company and I thought it might be worth mentioning it on this digital forum, since we denizens of the Land of the Silver Disc don't all follow what's happening in Analogueland. Last week the Washington Post ran an article about Mobile Fidelity. The company has always said its vinyl reissues are all analogue. It turns out they've actually been cutting their lacquers from DSD files since 2016!

(The article is easy to find online.)

Personally, when Mobile Fidelity release something I want, I buy it on SACD; as I'm sure most folks on this forum do. So, I don't really feel like I've been cheated. But I can imagine a lot of those people who have been buying up their pricey vinyls over the years are incensed.

Thanks for posting.
Very interesting

The irony is that DSD256 is very much like analogue on play back and probably yields better results that using ageing analog tapes. It also explains why MoFi has continued to make SACDs available for most of their releases. It is a little disappointing to me that the DSD256 versions have not been made available for purchase. The MoFi statement is here:

They get a DSD transfer from the original tape. The output of their work is a DSD file. However, a lot of remastering happens between the two, it seems. As DSD is well-nigh impossible to edit natively, I assume the original transfer is converted to PCM, the engineers do all their work and then the file is converted back to DSD.

There does not appear to be any conversion to PCM in the mastering of MoFi LPs. Once the MoFi engineers have done analogue-to-DSD transfers, the rest of the LP mastering process occurs in the analogue domain. From Jim Davis' interview with Robert Harley:

"Any title cut from DSD64 was captured from 2011 to January 2014, using the Meitner A/D. When better technology became available, we upgraded to the Merging Technologies Horus A/D which captures in DSD256... Starting with the original tape and using our custom Tim de Paravicini Studer A80, our engineers do a rundown of the recording, noting azimuth-alignment-settings for each splice and edit. Once there has been a thorough evaluation of the tape, the engineer captures the first song or up to the first edit. At each splice point he realigns the azimuth. This precision alignment is crucial to maximizing information retrieval from the tape. These tapes could have been recorded at different studios on different tape machines, and it is vital to mirror these machines by continually aligning azimuth. After the capture, the DSD file is evaluated in Sebastopol and returned to the analog domain. Using a Tim de Paravicini analog EQ, the engineer makes his equalization adjustments. EQ is not done in the digital domain. This signal is then fed into the lathe cutterhead, which is driven by Tim de Paravicini tube amplifiers."

Again, note that the foregoing excerpt deals with the production of LPs.

MoFi concealed their use of DSD technology in the production of LPs through carefully-worded marketing material that avoided describing the exact, step-by-step mastering process. Reading about the efforts taken by MoFi's engineers to create high-quality DSD64 and DSD256 files of original master tapes makes it difficult for me to understand why those processes were intentionally concealed. Once MoFi decided to produce LPs in a tape-DSD-analogue chain, they should have been forthcoming, even at the risk of losing the purists.

What has not been discussed publicly in the course of this uproar over MoFi LPs are the details of the DSD-to-SACD stage in MoFi's mastering chain. Is there a analogue EQ step in SACD production? It would seem so, judging from the description of MoFi's LP mastering process, and the sonic differences between MoFi's Miles Davis SACDs and those same titles from Esoteric and Sony Japan. I'm not a "straight-to-DSD" purist, but I am curious about different approaches to presenting analogue recordings in digital formats.

As the opening of the WP article points out correctly, this discussion is led with a religious fervor. If you are targeting the True Believers the way MoFi has been doing, ‚mostly analogue‘ is just not good enough.

It‘s like selling vegan cookies and then having to admit that they contain just that tiny bit of bacon grease... They might be the best cookies in the world, and most people couldn‘t care less, but the die-hard vegans would feel betrayed. And rightfully so.

Personally, I sold my vinyl collection around 1992 and never looked back. These days, my goal is to find the best available mastering on a silver disc. I also believe that any ‚digital sound‘ is not in the medium, but an insufficiency of your stereo system. Which could be considered just another religious belief, I guess.