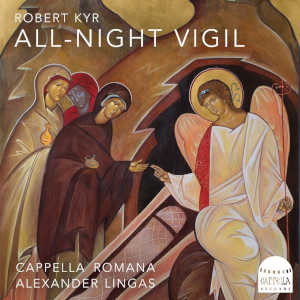 In these testing times, music from heaven is more than welcome as it may comfort believers and non-believers alike. The All-night vigil follows traditional Eastern Orthodox patterns, but it could also be associated with a custom that goes back to the Middle Ages and is still maintained in some parts of this world: Keeping an all-night ‘wake’ awaiting the following day’s funeral of a deceased near and dear. It was done for ‘nine eleven’ in New York. With an ongoing war in Eastern Europe, one can only hope that a similar tribute be paid to all those who perished in combat.

Cappella Romana cannot get more laurels than the five stars it has already received multiple times from around the world. In that sense, a further 5-star review wouldn’t add much. But there is more to be said about and learned from this release. Robert Kyr: “For more than thirty years, I have dreamed of creating an English setting of the All-Night Vigil text that Rachmaninoff chose to set in Church Slavonic, the most common liturgical language of the Slavic congregations of the Eastern Orthodox Church”. The English version of the ancient gospel used in this release comes from Fr. Ephrem Lash, which, according to Kyr, gave him the spiritual encouragement to create a “full-length a cappella setting”. Texts are given in the booklet and for detailed information on how Kyr constructed the score, I urge everyone to read his essay, modestly called a personal note.

Putting things to the test, it soon becomes apparent that the complexity of Kyr’s composition goes far beyond the competence of a nonprofessional choir. The conductor, Alexander Lingas, adds his scholarly views on the execution in a separate essay, describing the All-Night Vigil as “a concert work deeply indebted to Orthodox traditions of liturgical singing”. In other words, by its nature not suitable for a regular church service. That may be so, but what counts for us is the result as presented here: A brilliant statement of the ancient Eastern Orthodox Gospel in a modern setting.

All-Night Vigil is part of a cycle ‘Life unto Life’, exploring the journey of Christ’s life, a cycle that is now nearing its completion. The modern setting doesn’t mean that it is modernistic. Commensurate with the subject matter, the singing follows traditional patterns. Needless to say that once again the female and male voices of Cappella Romana are beyond reproach, taking the listener for just over an hour into another, mystic world. I think that Robert Kyr could not have had a better advocate for his music than Alexander Lingas and his Vocal Ensemble.

The booklet contains a photograph of Cappella Romana with the singers, the conductor, and the composer in freestyle clothing. Is it to remind the listener that despite their divine singing they are in essence just as worldly souls as all of us? I think so, and that speaks for them.

The recording is, as usual, of the highest Soundmirror standard and should best be listened to in multi-channel.