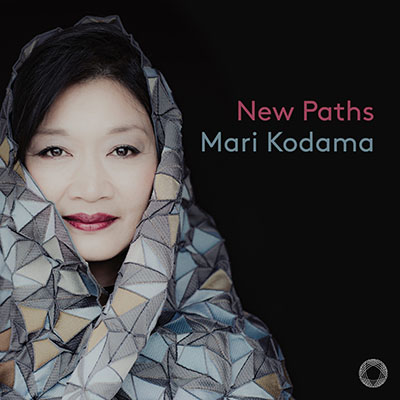 Johannes Brahms:
Piano Sonata No. 1, Op. 1
Variations on a Theme by Schumann, Op. 9
Theme and Variations, Op. 18B


Mari Kodama presents New Paths, exploring the young Johannes Brahms and his fascinating friendship with Clara and Robert Schumann. The album derives its title from Robert Schumann’s famous essay “Neue Bahnen”, in which he heralded the young Brahms as the most eminent musical voice of the future. The programme brings together Brahms’s first piano sonata, his Variations on a Theme by Robert Schumann, Op. 9, as well as his Theme And Variations, Op. 18B, made at Clara Schumann’s request. The final word is given to Clara’s arrangement of Robert’s song Widmung. New Paths not only explores the unique bond of these three remarkable composers, but also shows the energetic self-confidence of the young Brahms, so different from his later melancholia. Kodama performs these works on a brand new Yamaha piano that almost sounds like a period instrument, coming much closer to Brahms’s sound ideal.

Some time ago (September 2019) Pentatone released Mari Kodama’s monumental survey of all 32 Beethoven Sonatas. It garnered her many laurels and worldwide recognition. With this latest recording, she confirms her talent and, in my view even more important, her unambiguous feeling for human compassion. With ‘New Paths’ she aims at sharing such feelings with her audience portraying a three-way friendship between Johannes Brahms and both Clara and Robert Schumann.

Much has been written on this subject and some of it has been speculated about as well, notably as regards Brahms’s feelings for Clara. In a personal note, Mari Kodama takes an intriguing view, describing her fascination with this relationship, the power, the strength, and the musical energy that has emanated from it. To tell her story, she has composed a programme of considerable originality and musical interest.

It begins with Brahms’s first Piano Sonata (No.1 Op. 1); a sonata reflecting the burgeoning sentiments and vigour of a 20-year young composer. In her reading, Mari draws our attention to the hugely difficult score with ample intellectual intensity, phenomenal technique, and thoroughly passionate empathy. She makes abundantly clear why this sonata, expanding on patterns introduced by Ludwig van Beethoven in his Hammerklavier Sonata, met with Schumann’s admiration marking it as a new path forward.

There are, of course, more prime choices for this sonata, but the story goes on. Delving deeper into Mari’s uncovering of the essence of the triangular friendship I was downright carried away by her intuitional approach to the Variations on a Theme by Schumann Op. 9. She opens up a whole new world of make-believe. Taking a somewhat slower pace than Jonathan Plowright (BIS), preferring tenderness over momentum, Mari Kodama does not just play a composition; she has the imaginative ability to lay bare what is hidden in the score: Brahms’s deepest, passionate feelings for the newly discovered friendship in all its human and personal expression. For both? Or is it a secret declaration of (impossible) love for Clara? Whatever it was, Mari Kodama has the extraordinary gift to convey her emotional insight to the listener. That, in my view, is what makes her interpretations so very special.


A sad element of the threefold friendship is that Robert Schumann’s mental health quickly deteriorated, leading to his death only three years after he and Brahms met in Dusseldorf. But the bond was such that Brahms remained Clara’s support and refuge, even after having left her and moved to Vienna.

In the Theme and Variations Op. 18B, taken, at the request of Clara, from the second movement of his String Sextet Op. 18, Brahms shows a different, more mature, even melancholic character. Or was it a sign of ‘tristesse’ for something that never materialized? In her interpretation, Mari Kodama depicts an austere mindset in each of the variations, bringing her tale of friendship and discovery of ‘New Paths’ to a magic end, for which she has selected the first song of Clara Schumann’s piano transcription of Robert’s song cycle Myrthen Op. 25.

This recital is as impressive as it is thought-provoking.

Using a new Yamaha with a sound resembling that of Brahms’s own piano is an interesting feature, and together with Erdo Groot (Polyhymnia International) taking full responsibility for a most rewarding sound picture makes this release all the more worth anyone’s while.