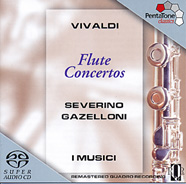 This is classic Vivaldi playing from I Musici and Severino Gazzelloni. Therefore, some of the tempi, phrasing and size of orchestra are rather different from what is normally encountered in concert today. Whether one finds this objectionable or not is up for the individual listener to judge but I must say that the overall approach does sound a little dated at times.

The most telling differences in tempo & phrasing are that the speeds adopted are less exaggerated than is commonplace today (the slower movements are broadly the same as one would here now but the faster movements are decidely less up tempo), coupled with a "straight" reading of the musical line (no embellishments here). The forces are also much larger than those used today, so in the tutti string passages there are moments where the sound might almost be considered too much for modern ears. One can only just make out the continuo during quieter moments.

Overall, the playing is good for the time it was recorded and whilst things have moved on, one can see how I Musici helped cement Vivaldi's lesser known works in the public's conciousness. Gazzelloni has a fine technique although there are many notes that he & I Musici are not agreeing 100% on tuning (and I'm not entirely convinced that this was intentional). A generally recommendable performance from a bygone era.

I have no reservations at all about the recording; it is well balanced and the tapes are not audibly aged. The most astonishing aspect of this disc is how consistent the Philips (and now Pentatone) engineers have managed to make the recordings sound over the five years that this disc was taped. The only warning I have is that the level is much higher than many other SACD's I own, so be careful that Vivaldi doesn't come storming out of your speakers like a Bruckner climax!