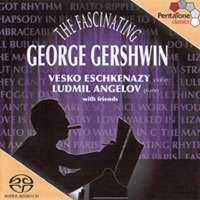 Don't miss this highly entertaining disc! I'm very surprised that no-one has reviewed it here since it was issued several years ago - it is a real gem. Vesko Eschkenazy is the first principal violin of the Royal Concertgebouw Orchestra, and fellow Bulgarian Ludmil Angelov is a pianist who now performs duos with Eschkenazy. Clearly both of them have great love and respect for the music of George Gershwin. Together with arranger Bob Zimmerman they present us with an overview of Gershwin's career, which is a little like a set of Student Notes - it is all distilled for you. Not only are there Zimmerman's inventive but always idiomatic original arrangements of the songs and extracts from musicals, but others by Jascha Heifitz of the Three Preludes for Piano with breathtaking virtuoso work, his selection from Porgy and Bess for piano and violin and his unfinished arrangement of An American in Paris which was recreated for this disc. Gershwin's early piece for string Quartet, 'Lullaby' is a masterly tone-poem in itself and one of the high points of the record.

Fellow members of the Royal Concertgebouw heard about the Gershwin project and wanted to join in. The extra instrumentalists add a great deal of colour and texture to the proceedings. George Pieterson brings his liquid clarinet to the stunning Rhapsody in Blue for small ensemble, aided by percussionist Herman Rieken and other string players. The Polyhymnia recording took place at the Doopsgezinde Kerk in Harlem and is absolutely ideal, with instrumentalists placed at just the right distance before you in a warm, flattering acoustic. It is at one with the performances.

I find it impossible just to play one track but always have to listen right through. At times seductive, always full of vitality and rhythm, this is a conspectus of the amazing breadth of Gershwin's musical achievement in such a short lifetime, and a tribute to him by some very fine fellow musicians. Not only will you hear the familiar old melodies which steal into your conciousness, but discover much that is new, and so want to explore Gershwin further. An ultra-sophisticated jam-session!