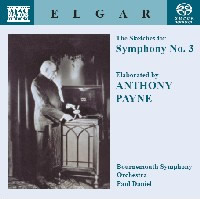 One of the major casualties of Naxos’s decision to abandon SACD has been the lack of worldwide availability and distribution of Paul Daniel’s superb recording of the Payne completion of Elgar’s 3rd Symphony in this format. The SACD version, released by Naxos (Hong Kong) in 2004, was, to the best of my knowledge, never distributed in Europe or the US.

The good news is that, at the time of writing this review, it can still be fairly easily obtained.

The BBC SO under Andrew Davis gave the premier of Payne’s completion in February 1998 and a CD of his performance was quickly issued. Since then there have been two further recordings, LSO/Colin Davis (RBCD) and this one.
The background to Anthony Payne’s realisation of the dying Elgar’s sketches is quite widely known, but those unfamiliar with it or seeking further detail will find it at http://www.elgar.org/3symph3.htm#elgpaynel.

The opening bars of the first movement clearly illustrate Daniel’s athletic approach to the score. Andrew Davis in comparison seems worthy, but almost too reverential, and while the BBC Symphony orchestra play well for him they do not match the attack and excitement of Daniel’s Bournemouth band. Further, Daniel’s placing of the violins left and right makes their antiphonal exchanges, for example just before the appearance of the second subject (0.59 onward,) particularly striking and this is true throughout the symphony.

The delicate scherzo is played with great sensitivity and with every detail of the orchestration perfectly captured by the recording, the insistent tambourine always audible but never too obtrusive.

On neither of the other recordings is the overwhelming sadness of the slow movement so touchingly conveyed. Daniel’s chosen tempo ensures that stasis is avoided while at the same time he never allows the emotional impact of the music to be diluted by pressing forward too much. This is an ineffably moving performance.

The thrilling Bournemouth brass opens the finale in heroic style, and once again Daniel’s grasp of what was probably the most difficult movement for Payne to construct is totally assured. He plays it for all it is worth and his build up to the final chilling close is quite magnificent.

Tony Faulkner’s recording, which could hardly be bettered, vividly recreates the rich acoustic of the Guildhall, Southampton particularly in the 5.0 surround layer.

The forthcoming Chandos version by Hickox and the BBC National Orchestra of Wales, due for release in November 2007, will have to be outstanding to better or even match this one.

It seems to be easier to find this recording in surround sound as a DVD-A. Still (April 2016) available from UK Amazon.