3 Concertos for a New Century - Concertgebouw 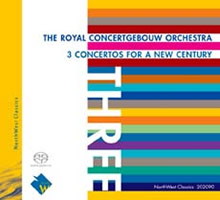 
Contemporary music making has always been an intergral part of the Royal Concertgebouw Orchestra's repertoire and history, so it was logical that with the 21st century's impending approach the commissioning of new works by Dutch composers was seen as an artistic imperative for the future. This resulted in the commissioning and creation of 3 new solo concerti from outstanding Dutch composers, each of whom was allowed to choose any principal player from the RCO they desired as solists. The first premiere performance was the Horn Concerto by Geert van Keulen with principal hornist Jacob Slagter on the 20th September 2001. Theo Loevendie's Clarinet Concerto for George Pieterson was first performed on the 13th of June 2002. The last to be premiered, on 26th of September 2002, was the Flugelhorn Concerto "Il profundo di dundo", from the hand of Willem Jeths, NorthWest Classics' composer in residence. It was written for the RCO principal trumpettist Peter Masseurs.

These 3 world premieres were recorded directly in audiophile SACD quality, and this NorthWest Classics SACD is in itself a world premiere, being the first SACD release of the Royal Concertgebouw Orchestra using audiophile recording technology and mastering.