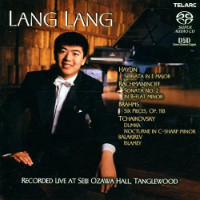 Here we have Lang Lang's first recital for Telarc in 2000. At the age of 18, he took on a programme which would have challenged a great master such as Bolet or Gilels. This self-confidence is reflected in the performances, which are poised and entirely idiomatic. It is very pleasing to see that he frequently includes Haydn in his recitals, as the Haydn sonatas have long been neglected, especially by younger pianists, whose agents seem to have their sights on crowd-pulling virtuosic works.

Lang Lang's performance of the E major sonata, Hob XVI:3.1 is a beauty. The first movement begins softly, tongue in cheek, and is playfully full of light and shade. Without pedal, his articulation is precise, the trills and other ornaments very fast and even - shades of Domenico Scarlatti. The Bachian Allegretto shows he is unafraid of using the tone colours of a modern piano to voice the self-communing contrapuntal lines, and the Presto finale is just cheeky, with its extremely fast crush notes.

Following the crystalline beauty of the Haydn, Lang Lang plunges both hands deep into the agitated and turbulent world of Rachmaninov's second sonata. Always aware of the structure, he relishes the textures and melodic lines which pass between hands and registers like moving clouds. He clearly feels this work personally, and takes his time in the more relaxed interludes to savour the fragile melancholy, and then builds to a thrilling and thunderous climax, never sounding percussive or overblown. Even at powerful volume, complex textures are always clear, and the dynamics shaded and under control. In the pensive slow movement, he relishes Rachmaninov's piquant harmonies, with a pianissimo touch that is spell-binding, never loosing depth of tone. A passionate finale concludes a very fine reading of the sonata, which is all about Rachmaninov, with Lang Lang his faithful servant.

The Brahms Op.118 pieces are a perfect foil to the Rachmaninov. Their moods vary from delicate and intimate poetry to sheer defiance, and Lang Lang has their measure. He gives them a feeling of impermanence; passing episodes in their autumnal context. Again he follows Brahms' dynamic instructions exactly, so that pianissimos register properly - what a difference to many other recitalists, who seem to adopt a generalised mezzo forte much of the time.

Unusually, he next plays two little-known pieces by Tchaikovsky. The first is a Dumka, subtitled Russian Rustic Scene, in which a melody evidently a first cousin to The Volga Boatman's Song develops into a sparkling and virtuoso peasant dance. This injects some welcome lightness into a mostly serious programme. It is followed by a Nocturne in C sharp minor, written the year before the first piano concerto, where a wistful little tune becomes distinctly non-nocturnal.

The recital has been building towards Balakirev's Islamy, a piece of legendary technical difficulty which would make many a veteran pianist quake in their boots. Lang Lang, with his mere 18 years, has it so completely under his fingers that one hardly feels the crushing problems. Instead he gives us a coruscating display of pianistic colour and nuance, without brutality or mere shallow display, and finishes with a risk-taking throw-away flourish so audacious as to make the listener loose his breath. The audience respond appropriately!

A stereo-only DSD recording, the sound of the well-prepared Steinway D is very immediate, with excellent reproduction of its famous bass growls. However, I felt the microphones were rather too close. A good piano needs to have a room respond to and develop its case resonances, but there is almost no hall sound, except perhaps when the applause begins. When Lang Lang finishes playing and leaves the dampers up, one can hear all the overtones clashing for many seconds, just as if you had you head in the case. Nevertheless, a fine, rich sound, and if you pass your analogue output through a Dolby PLII chip on the Music setting, a centre and rear signals are generated, which adds some of the missing hall sound and adds to the realism.

This is a very desirable record of Lang Lang's early career, remarkably well-played in a self-effacing manner, and an excellent programme worthy of repeated listening. Without doubt Lang Lang is a superlative musician. 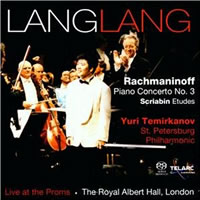