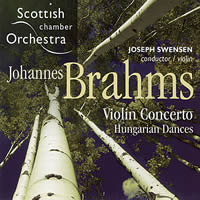 Swensen's authoritative command produces well-characterised and energetic performances in the selection of Hungarian Dances orchestrated by Dvorak, Schmeling and Brahms himself, among others. Guided by Swensen the SCO give dynamic, technically assured and intimate readings overflowing with the subtle touches and flourishes.

A disc of two halves - the first not so good, the second a delight.

First up is the violin concerto and one in which Swensen is clearly better attuned to the musical sensibilities than in his account of Mendelssohn: Violin Concerto, Symphony No. 3 - Swensen. Even though the Scottish Chamber Orchestra is a relatively small ensemble for Brahms as those who grew accustomed to the likes of Karajan's titanic accounts from Berlin, their tone is far from lacking and in the not quite ideal acoustic of the Usher Hall in Edinburgh a solid orchestral image is projected. This is clarified Brahms, not undernourished playing from the SCO. It is just a shame that Swensen insisted on directing the account from the violin, for there are moments when the coordination between himself and the orchestra (as well as within the ensemble) is less than tidy; in addition, there are pauses required because of the lack of a conductor that I'm sure Swensen would not sanction were he purely conducting or playing.

After this is a most enjoyable and recommendable selection of Brahms' Hungarian Dances (14 from the complete set of 21). Inevitably one will quibble about the exact selection and ordering of such a collection (they are not presented in numerical order) but the sheer joie de vivre of the playing is winning and guaranteed to put a smile on the face of all but the most jaded of listeners. The smaller ensemble here is a major factor in the success, with a clarity of playing and ensemble in rubato of which the VPO would rightly be proud.

The sound, recorded in the Usher Hall, is a good reflection of the less than perfect acoustic but gives the SCO a certain weight and allure that a more revealing concert hall might not grant.

Almost impossible to rate using the stars: 2.5 for the concerto performance, 5 for the dances. 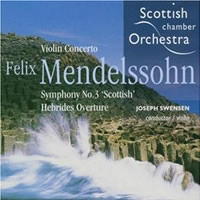 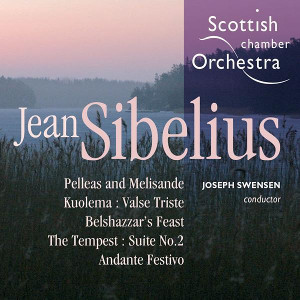 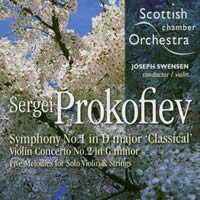 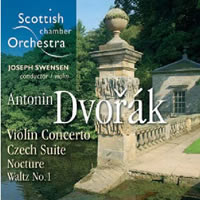