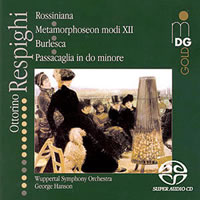 This SACD presents four of Respighi’s less familiar compositions, including one absolute masterpiece, the Metamorphoseon.Modi XII Tema e Variazioni (26.50), for the first time on SACD. This work ought to be as popular as the Roman Trilogy, but perhaps its daunting title militates against it, in the same way, as Hindemith’s Symphonic Metamorphoses on Themes of Carl Maria von Weber does not immediately suggest the lively, tuneful piece that it is.

Serge Koussevitzky commissioned Metamorphoseon for the 50th anniversary of the Boston Symphony Orchestra in 1930 and Respighi made the most of the opportunity to write a work that would exploit the virtuosity of one of the world’s greatest orchestras.
It is a set of 12 variations on a noble theme first stated by the strings. The music is full of a grave beauty and imagination, offering wonderful opportunities for individual players and groups within the orchestra to shine. This aspect is well illustrated in the striking Modus VII, which consists of a series of accompanied cadenzas for harp, cello, violin, viola, horn, bassoon, flute, clarinet, oboe and bass-clarinet. In the final variation, Modus XII, an organ joins the full orchestra to bring this splendid piece to its triumphant conclusion.

The Rossiniana suite (21.49), as one might expect, inhabits the same territory of La Boutique Fantasque, particularly in the sparkling Tarantella with which it concludes. It does, however, have a more serious central movement, marked Lamento - Andantino maestoso, a sombre funeral march that begins with tam-tam stokes reproduced with startling vividness in this recording. Hanson and the Wuppertal Symphony Orchestra really sound as if they are enjoying playing this suite and bring out all the details of Respighi’s delightful orchestration with their stylish playing.

The brief, early Burlesca (6.14) follows, and this piece does at times bring to mind passages in The Fountains of Rome. It is not its first recording, as the booklet notes claim, but it is superior in both sound and performance to the Naxos version of 1991. Finally we are given a superbly played account of Respighi’s imposing transcription of Bach’s Passacaglia in C minor (13.42).

On this SACD the acoustic of the Stadthalle in Wuppertal appears both spacious and sumptuous, while the sound as captured by MDG has the necessary impact and richness required for this music. The surround channels add just the right degree of ambience and increase the overall sense of depth.
This is a major addition to the Respighi discography.