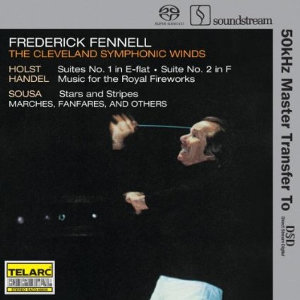 The two Telarc/Teldec albums concatenated in this SA-CD were recorded in 1978 in the Severance Hall of Cleveland, Ohio. Their Soundstream Digital Tape Recorder captured the sessions with a sampling rate of 50kHz. From these tapes Teledec made masters for vinyl and later RBCD. These media were almost immediately snapped up by collectors, myself amongst them. 'The Cleveland Symphonic Winds' disc gained fame around the world for its realistic bass drum, possible because the Soundstream could reach 0Hz, i.e. DC.

The RBCD version had to be converted from 50kHz to 44.1kHz, which inherently caused a loss of quality (a) by lowering the frequency response and (b) by the complicated maths of down-sampling from 50kHz to 44.1 kHz. However, the present transfer to SA-CD via DSD uses the 50kHz masters unaltered, restoring the detail lost from down-sampling and presenting the original bandwidth. While this is not as HIRES as, say, a fully DSD capture, the solidity of this new version is unmistakable. The famous bass drum has great depth but less boom and more slam, i.e. is better focussed; the hall ambience is more evident, despite the lack of a multichannel track, and the instrumental timbres are cleaner, particularly in the bass clarinets and bass bassoons. The only downside which slightly disappointed me was a touch of hardness in the upper partials of the trumpets. Those with a receiver with Dolby PLII or PLIIx, a convincing reproduction of the Severance Hall acoustic is possible.

Frederick Fennell (1914-2004), a native of Cleveland, was an international conductor innovative in developing symphonic wind groups. Highly-regarded recordings for Mercury with his Eastman Wind Ensemble, founded in 1952, have now also been put on to SA-CD (Sousa: Marches - Fennell). In his erudite sleeve notes for the Cleveland recordings, Fennel remarks that two of the Cleveland works, Gustav Holst's two Suites for Military Band and Vaughan William's Folk Song Suite prompted the emergence of an original music literature for the few serious wind bands in America. The present SA-CD carries these and the most influential works from the Cleveland sessions such as Percy Grainger's 'Lincolnshire Posy' and Handel's Fireworks Music, adding some of the idiomatic Marches and Fanfares from the 'Stars and Stripes' original disc. Such a selection will likely upset some collectors who wanted to see both RBCDs upgraded but others will be pleased to have the important pieces on one SA-CD.

Many listeners to wind band music often do so without knowing the number of instrumentalists present in recordings, supposing that they are just the standard group of winds in an orchestra. However, take a look at the score for Holst's Suites and you will see the expected composition of British Military Bands:-
Op. 28 no. 1:- C Flute and Piccolo, D flat Flute and Piccolo, Oboes (number not specified), 3 B flat Clarinets, E flat Alto Clarinet, B flat Bass Clarinet, 3 Bassoons, E flat Tenor Saxophone, E flat Baritone Saxophone, Bass Saxophone, 1st and 2nd B flat Cornet, B flat Trumpets (number unspecified), Flugel Horns (number unspecified), 1st to 4th E flat Horns, 1st to 3rd Trombones, Euphonium, String Basses, Snare Drums, Bass Drums, Timpani and Triangle. Holst was an excellent trombonist and thus understood the instruments required to produce the full and varied symphonic sonorities of a good military band. Fennell's transparent and subtle phrasing brings fresh air to one of Holst's most vivid and memorable pieces.

Handel's first plan for the Fireworks Display in a London Park to celebrate War of the Austrian Succession and the signing of the Treaty of Aix-la-Chapelle in 1748 was first brought to King George II, who vetoed the use of strings, leaving only winds, brass and drums. The proposed wind band comprised 24 oboes, 12 bassoons and a contrabassoon, nine natural trumpets, nine natural horns, three pairs of kettledrums, and ad lib side drums. Using modern instruments, Fennell's ensemble was 3 Flutes and Piccolo, 8 Oboes, 7 Bassoons, contra-Bassoon, String contra-Bass, 5 Horns, 6 trumpets (2 piccolo A's, 4 D's), 3 trombones, kettledrums, 3 field drums, cymbals and bass drum. Charles Mackerras edited the arrangement used for the recording (in 1959 Mackerras himself recorded Handel's version between 11pm and 2.30 in the morning in St Gabriel's church, Cricklewood, London). Fennel's rendition of his selected parts of the Firework Suite is generally slower than that used nowadays, but it stunningly captures moods such as stately, bold and brassy, with a gentle lullaby for the concept of Peace and concluding with thrilling, triumphal joyousness. The players appreciation for Handel's music is felt in every bar.

Vaughan Williams' Folk Song Suite is a parallel to Holst's Suite; composed in 1923 for military band and arranged for full orchestra in 1924 by one of the composer's students, Gordon Jacob. It had another arrangement, this time for an English-style Brass Band by Frank Wright. Fennell refers to this as "one of the supreme examples in a literature until recently sadly neglected in theis company". The Cleveland players overcome any technical difficulties and they pick up beautifully on the elegance of Vaughan William's writing, with its sublimely layered orchestration.

The notoriously unique Australian composer Percy Grainger drew up his 'Lincolnshire Posy' in New York early in 1937. He had been collecting English folk songs with Vaughan Williams, and was haunted to find ways of transcribing their unique rhythms into compositional material. 'Lincoln Posy' is indeed experimental, laced with grandeur, impish flashes and the pungency of piquant harmonies. Stravinsky's styles from the days of 'The Firebird' and folk elements of 'The Rite of Spring' are enmeshed with Grainger's English collection of folksongs. Technically, Grainger was boosted in his writing for bands by attachment to two fully-staffed military bands which could be used as laboratories for his explorations.

Spectacular single band pieces illustrate various kinds of marches; they are full of motion - and emotion. Leo Arnaud's Olympic Fanfare represents a static march, where originally there were some very difficult horn sections, which usually were taken over by trumpets. The Cleveland players had no qualms about playing this from the original score. Circus Marches are represented by King's brilliant, almost chaotic 'Barnum and Baily's Favourite', and Johann Strauss II's aristocratic 'Radezky March' (heard every year as the final encore of the Vienna Philharmonic's New Year's Day Concert). Fennel's version is as good as the VPO's! Inevitably there has to be one of the queue of Sousa's marches on the second compact disc, and it had to be the breath-taking swing of 'The Stars and Stripes' - what a performance, every opportunity taken to express every nuance of national pride by the Cleveland Winds.

This SA-CD programme, now in its original polished recording quality, is an essential compendium of superbly played band music which makes it a classic for the genre. An essential element in anyone's collection.

I've never understood why this recording is always so universally praised. I'm no critic or musician, but I strongly suggest you listen before you buy. Just as one example, the Holst Suites sound absolutely pallid when compared to the performances by the US Air Force Band on a CD entitled "Evolution" (Klavier).

Part of the Holst instrumentation also consists of the unmistakable Eb soprano clarinet, which was omitted in the lineup above... 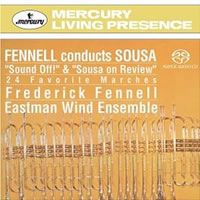 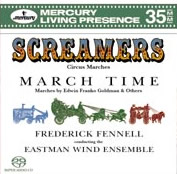 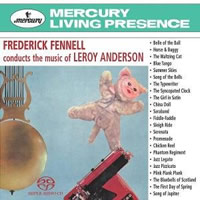