2015 comment : since I wrote this review for sa-cd.net, the representation of Webern on high resolution media has lagged behind what labels such as PentaTone, Chandos, BIS, Hänssler and MDT have recorded for Berg and Schoenberg. This means that this expensive Japan-only disc, if you can find it, still more or less has the orchestral field to itself. Karajan's classic early 1970s set of these composers has not been made available in the high res formats apart from the out of print Esoteric SACD. From what I've heard of this set from the CD only Japanese 'SHM' transfers, whatever the romantic magnificence of this conductor and the BPO, the actual sound quality was compromised, probably by excess multi-miking. Boulez's Webern recordings on DGG sound much better, though I prefer the sound Kegel is given on this SACD to what I hear from Boulez on CD, though the Frenchman's acute balancing of instrumental textures allows us to hear as deeply, perhaps even more so, into these scores.

However, for easily-available international releases, I'd recommend the MDG SACD with Webern's Orchestral Variations, and the marvellous 'Hagen 30th anniversary' SACD on Myrios for the original Op. 5 for string quartet and the Op.9 Bagatelles.

This Japanese-sourced SACD is currently one of the very few containing music of the Second Viennese School. Of Webern's 31 works with an opus number, only those from Op.17 onwards are composed in serial mode. Unfortunately Webern's major serial work, the brief Op.30 Orchestral Variations, has been omitted.

These performances were recorded in stereo analogue tape in 1977, the venue being a Leipzig church. The orchestra is the local radio band, not the Gewandhaus Orchestra. That being said, they play quite well, although there are patches of wayward woodwind intonation. As the liner notes are in Japanese, I have no idea of what the two pages of technical description say. Under 'A/D' there is mention of dCS and EMM, but the photographs are of a SADiE DSD8 and a Genex GXA8. There is minimal tape hiss, and within the limitations of the source tape, the analogue sound is reminiscent of the PentaTone 1970s Philips transfers. In other words, there are no hints of digital artefacts. The recording is good enough to detect that the sound of the gong/tam-tam after the climax of the Op.6 'funeral march' has been prematurely truncated rather than being allowed to fully die away.

The recording in a smallish but resonant church has some problems, which paradoxically almost become advantages with the nature of the works. There is an exaggerated stereo spread. The instruments are in the main miked closely. This means that ppp or pp can't really be achieved, and the dynamic contrasts between ppp and mf aren't as great as on some CDs. However, there is a good spread of dynamics beyond mf, leading to some hint of analogue tape saturation in the stupendous climaxes of the Passacaglia and the 'funeral march' of Op.6.

The reason these recording flaws are minimised is that the performances here are lush and tend towards the hyperexpressive. Although Webern would be the composer least associated with bombast, the volatile and quite enjoyable performance of the Passacaglia is in the Karajan vein : both Kegel and Karajan take 12 minutes over this, whereas Abbado on DGG 431774 with the VPO, and the early Boulez performance on the CBS/Sony complete works set, are both around the 10 minute mark. Indeed, these performances are the opposite of the early Boulez, where the Frenchman seemed intent on making every other melodic line have the appearance of a quasi-tone row. Kegel has taken care in presenting the flow of the thematic fragments as they progress from one set of instruments to another, especially in the musically daunting pointillism Op.10 and Op.21. This makes them more approachable compared to most other performances. ( I haven't heard these works in Boulez's complete DGG set.)

This clarity of the internal writing has been achieved by the relatively close recording, the wide stereo spread and the quality of the DSD transfer in capturing what was on the analogue tape. By comparison, the live 1990 performances with Abbado and the Vienna Philharmonic, which I thought was a well recorded CD when it was released, sound murky and distant. The Karajan performance on CD, recorded in the early 1970s, has a glassiness which is quite artificial compared to the sound of this SACD. Probably one reason why the Abbado and Karajan CDs have a rather distant sound is because the mikes were set up farther away to accommodate the huge dynamic contrasts of the Passacaglia. The funeral march of Op.6 is slower and grander in Kegel's hands than Karajan, though not as drawn out as Abbado's.
The enigmatic 'Symphony' has only two movements. Webern started a third, but abandoned this early in the sketches. One can hear far more of the texture of this work, and this applies also to Op.10, than in any CD version by a significant margin. This work is the only symphony I know of whose dynamics are entirely below forte. Distant CD recordings have the habit of making this work sound elusive to the point of passive aggressiveness, but the clarity of the recording here makes it clear even this work has an emotional beating heart.
Purists may object that the rather impulsive conducting is less fine than the balance achieved by Boulez, Karajan or Abbado. However, in these works which have no great performing tradition, and no great popularity, this so-called deficiency is more like a bonus. It presents these pieces in an emotionally compelling frame, rather than under a halo of analysis. 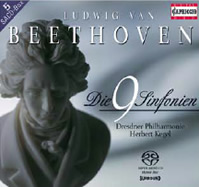