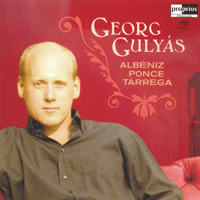 Swedish guitarist Georg Gulyás made an auspicious debut with Proprius on RBCD. Here is his first SACD, a recital of Spanish music, featuring some well-known original pieces and transcriptions mixed with lesser known works. Both guitarist and recording quality grab the attention with the first few chords from the arresting opening of Tarrega's Capricho árabe. Gulyás is seated before you, walls and speakers have vanished. Torbjörn Samuelsson's 5.0 MC recording, from the Swedish Radio Studio 2 at Stockholm, is stunning in its realism.

The almost inevitable tremolo study of Tarrega's Recuerdos de la Alhambra is one of the greatest tests for a player of the Spanish guitar. It features a mid-range fast tremolo, the upper notes bearing a flowing melody which rises and falls in intensity, while in the bass stalks a wide-ranging counter-melody. I once successively played interpretations of this piece by 8 well-known guitarists, including all the household names, and was astonished at the range of technical and musical proficiency revealed. Some of the household names were simply not up to this piece, and many failed my test. Only a few could successfully free the lovely melody and let it float from the tremolo, and at the same time not let the smooth bass line fragment. I am pleased to say that Gulyás came very close, but he does not yet quite have the superlative control to fully emancipate the treble melody.

Gulyás uses a guitar by Antonio Marin Montero of Granada, which has a richly resonant bass, a sunny and open mid-range and a sparkling treble. He has mastered the range of techniques to produce the many tone colours so crucial for this music, and plays expressively with both insight and affection. As well as the ability to beautifully project these lyrical vignettes of Spanish sights and cities, he has the muscularity and fire of the flamenco player to show off, as in Turina's Sevilliana. The substantial core of the recital is the French-inflected 'Suite compostelana' by Mompou. These fragile, intimate and often complex pieces are difficult to bring off, but Gulyás has their measure. He is particularly impressive in the Recitativo, a darkly emotional improvisatory movement which in other hands can sound rambling and may fail to hold the listener's attention.

This beautifully recorded and compellingly played concert brings the sunshine of Spain into one's listening room and is strongly recommended. Keep an eye (and both ears) on Gulyás; I hope that he and Proprius will bring us many more guitar discs. 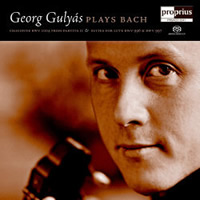 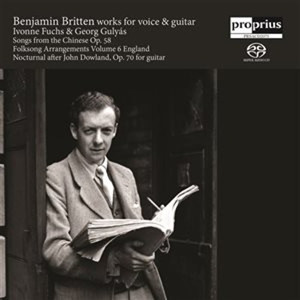