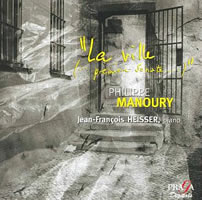 
“La Ville” for solo piano, can be understood as a sort of postlude to K, a stroll outside of time, a tribute to the historic quarters of Prague haunted by the shade of Kafka, as much a psychological labyrinth as a seemingly abstract construction with a strange power of fascination (world premiere).