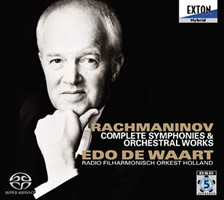 This box set advertises itself as the complete orchestral works by Rachmaninov and my first thought was “where’s the Vocalise?” Then I realised that because Vocalise is not an original orchestral composition, we should not feel misled. Although for the sake of a few minutes that could have been easily been accommodated onto any of the discs, it is shame this popular favourite is not included.

This set was recorded in the studio of the Radio Filharmonisch Orkest Holland over a period of two and a half years, starting with the second and third symphonies in the winter of 2001, continuing with the first symphony and the tone poems Caprice Bohemian in the early summer of 2002 before the remaining major tone poems were taped in late winter of 2003 (the juvenilia was put down in late spring of the same year).

Despite the range of recording dates, the sound is surprisingly consistent in all but one important exception. That exception is the third symphony which, despite emanating from the same sessions as the glorious second symphony, is badly mismanaged so that the recording suffers from excessive reverberation time which clouds all manner of detail that, if one creeps up to the individual speakers one can hear, is trying to creep out. Curiously the second symphony doesn’t suffer from this at all and I have to wonder how Exton allowed such an incongruous mix to be put out to market.

Broadly speaking the discs contains the major works in chronological order but with the smaller tone poems arranged to fit in around their more mature and grander counterparts. The first symphony is frequently cited to be Rachmaninov’s strongest symphonic work (although in popularity it doesn’t hold a candle to his next effort). Edo de Waart brings out the thematic links across the whole of the work and allies this with an electric response from the Radio Filharmonisch Orkest Holland – this is probably the best playing of the set. Concluding the first disc is a long (and long-winded) attempt at pretending to be Dvorak and Smetana; the tone world is spot on but the melodic fragments has neither the easy grace nor the melancholy that underlies so much of the Bohemian soundscapes or the majority of Rachmaninov’s own compositions.

The second symphony faces some stiff competition from Rachmaninov: Symphony No. 2 - Fischer and for to whom this is important, the Radio Filharmonisch Orkest Holland do not sup at quite the same table as Fischer’s ensemble in terms of quality or accuracy. That said, there is nothing that will seriously offend anyone’s ears and I can imagine that many will enjoy the more structured presentation that de Waart brings to what can all too often become a meandering sprawl of notes. This account is less spontaneous than that of Fischer’s but is by no means staid – he just has a different set of priorities; you pays your money, you takes your choice. The “Youth” symphony is definite juvenilia and once heard, is best and easily forgotten, despite the sterling efforts here to persuade the listener otherwise.

The disc containing the third symphony contains some of the best music making but also (as noted above) the worst mixing. Like the other symphonies, de Waart is straightforward in interpretation producing a coherent musical argument that helps overcome many of the potential pitfalls contained within the score. The Isle of the Dead is also treated to a fine performance (not marred by anything fortunately) and is a close rival for Rachmaninov: The Isle of the Dead, Symphonic Dances - Jurowski performance and is accorded far better sound. The Scherzo is clearly a pastiche of Mendelssohn's Midsummer Night’s Dream counterpart, with a larger orchestra in mind, and shows how uncannily Rachmaninov could encapsulate another composers’ style – something that was later reflected in his many transpositions for the piano.

The Symphonic Dances are well done here – the major quibble I have is a lack of ecstasy that the better accounts evoke that is missing from the third movement in particular. For those that this matters, the last smash rings on for a long time (and unlike the otherwise superb Stravinsky: Petrouchka, Rachmaninov: Symphonic Dances - Jansons is not overwhelmed by applause). The kaleidoscopic textures are very clear and superbly balanced by de Waart and the Exton alike. The Rock is in many ways a fascinating piece, despite the early opus number, with the gloomy canvas bought vividly to light here. The symphonic poem that concludes the set is juvenilia which has a couple of interesting moments but is hardly makes a case for Rachmaninov being a serious composer; de Waart and his orchestra make the best they can of this work without ever convincing one to believe that this should be a regular of the concert platform.

The Exton discs come with superb notes, with a general introductory essay and then a disc by disc summary of the music. One wishes that all issues could have as illuminating and pertinent accompanying booklets.

[For the European release, notes are all in the customary languages (no Japanese needed!)] 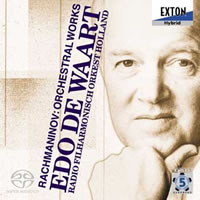 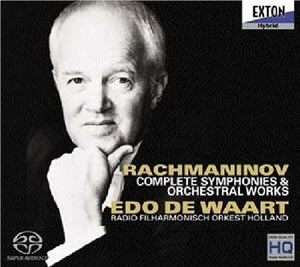