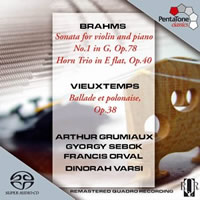 One of Pentatone's RQR series, where four-channel tapes from the 1970's are carefully converted direct to DSD with amazing results. I certainly never heard such surround fidelity from my Sony SQ/QS decoder of the time! In this case, the Brahms works come from 1976 and were put down in the Concertgebouw, whose warm acoustic immediately envelopes you in the 4.0 transcription. Philips was noted for their excellent balancing of chamber music at the time, and the sound here is gives a very natural concert experience. The Vieuxtemps taping came from a Swiss Theatre in 1973 and is notably drier. In both cases the piano is very well caught, with a mellow bass and clear treble without ringing.

Brahms wrote this G major Violin sonata at the same time as the Violin Concerto, when he was on holiday near the mountains, and it has some wonderfully lyrical and relaxed passages. He used some material from two of his songs, both about rain. Grumiaux was well-regarded as an elegant and steady performer and the performance is affectionate and generous. Brahms' earlier Horn Trio recalls the death of his mother in its Adagio mesto. However, it cheers up in the jolly galumphing finale, where the horn is finally allowed to let go. This performance is rather subdued, however, compared say with the Ashkenazy, Perlman,and Tuckwell RBCD. Grumiaux shows off his virtuoso side in the Chopin-influenced Ballade and Polonaise by Vieuxtemps, but the upper range of his violin tone is here not as refined as in the Brahms Sonata. He is recorded more closely in this venue.

Not definitive then, for any of the works, but a nicely-balanced programme which gives pleasure and merits repeated listening.