Only a minor point, Adrian, but streaming services do indeed stream in Hires (but not so far in surround). One of the most successful, based in your own country I think, ... 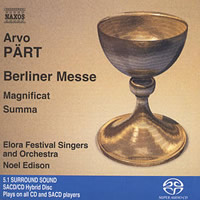 
With a number of modern classics already to his name, notably the Symphony No. 3, Tabula Rasa, Fratres and Cantus in memoriam Benjamin Britten, culminating in 1982 with his largest work thus far, the St John Passion, Arvo Pärt has during the past 20 years consolidated his reputation as one of the most significant composers at work today with a sequence of magnificent sacred choral works.

The present recording provides an overview of Pärt's mature idiom with works written on either side of the Passion, and in which a gradual expressive opening-out and harmonic enrichment of the composer's musical vocabulary can be detected. The Magnificat is perhaps Pärt's most immediately appealing choral work whose alternation of solo and tutti sections imparts a powerful spiritual aura.