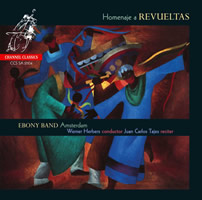 This is a most enterprising and worthwhile SACD of the Chamber works of Revueltas, much of whose music is hardly known.

'Sensemaya' is familiar in the full orchestral version from recordings by, for example, Stokowski and Bernstein, but here it is presented in an earlier version for fifteen instruments. In this very clear and vivid live recording it makes as much impact as with a large orchestra with incisive, tangible percussion very present. The other pieces on the disc are equally fascinating and colourful, particularly 'El renacuajo paseador' (the wandering tadpole!) and 'Caminado', while 'Pieza para doce instrumentos' inhabits the same sound world as Stravinsky’s pieces for small orchestra, albeit with a Mexican flavour.

'Hora de Junio' is the one piece in the whole collection that I personally did not care for much. A ‘reciter’ declaims three poems over the music and it also features a couple of coughs from an otherwise totally silent audience!

Channel Classics provide a quite close-miked sound for the whole disc, but it is certainly state-of-the-art, with every instrument clearly placed in the sound stage, yet it has a pleasing ambience throughout provided by the acoustic of the Tilburg Concert Hall.

The Ebony Band, Amsterdam, is obviously a group of thirty, or so, excellent musicians who really bring this music to life, and I can’t imagine the performances or the recordings being bettered.