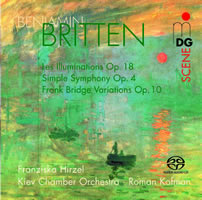 The beautiful Monet painting on the cover of this MDG release gives more than a hint of its contents. Britten's setting of Rimbaud's lavishly sensuous and highly impressionistic prose-poetry, Les Illuminations, is the main work here, together with the magnificent Variations on a Theme by Frank Bridge. Right away I can say that neither work is an overall first choice - the recordings by Britten on Decca and Felicity Lott on Chandos still remain in prime place. However, in terms of SA-CD and multi-channel, the choice is betwen this MDG and Linn (Benjamin Britten: Les Illuminations - Scottish Ensemble) for both Les Illuminations and the Bridge Variations, and Pentatone (Britten: Frank Bridge Variations, Hartmann: Concerto Funebre, Bartok: Divertimento - Nikolic) for the Bridge Variations alone. It has been a most interesting and informative exercise to compare performances and recordings on all three discs. This is undoubtedly music that grows on you and with you.

First, Les Illuminations, written for high voice and string orchestra, obviously with Peter Pears in mind. The atmosphere and imagery of the Rimbaud poems Britten chose to set is fervid, highly colourful and full of stark contrasts. There is an overall duality of views - one full of beauty, one stark and terrifying, often juxtaposed in a single line. Britten's settings in response are as swiftly changing and dualistic as the heady language of the poems. In the MDG version, we have a string orchestra of 20, and a soprano, Franziska Hirzel. She is expressive and fluid in her approach; subtle, seductive and distraught in turn, generally beautiful in tone. She and the orchestra tend to go for long lines and flexible phrasings. Both she and the orchestra are flattered by a generous and glamorous acoustic, the recording venue being a church in Bad Godesburg. The players are arrayed before you, behind your speakers, with good depth and excellent low bass in the 5.1 track. There is some loss of detail in all the resonance, for example it is very hard to hear any of Miss Hirzel's words. Contrast this with the other SACD version from Linn, where there is a tenor soloist and a much smaller string group - the Scottish Ensemble - which comprises 6 violins with 3 each of violas and cellos and 2 basses. Recorded in the Caird Hall, Dundee, the sound here is much more immediate, sometimes I felt too much so, with the nearest violin's tone hardening at climaxes. Rather uncomfortable at times in both in its earthy and elemental approach, but full of detail. The tenor, Toby Spence, makes a greater effort to enunciate and to bring off a French accent, not entirely successfully, but you can generally hear every word he is singing. The small group, under the direction of first violinist Clio Gould, give a vital, angular performance, almost Stravinskian, which brings out the menace and shadows implicit in the texts, rather than highlighting their heady beauties. The players in this small group have an opportunity to be almost soloistic here and are thus encouraged to put their personal stamp on the work, and they obviously relish doing just that.

Next, the Bridge Variations, a commission given to Britten and the Boyd Neel String orchestra for performance at the Salzburg Festival in 1937. Britten took a theme from one of his teacher and mentor's works, the second of Three Idylls for String Quartet. Frank Bridge was a profound early influence on Britten, and the Variations, like most of Britten's compositions, is a many-layered piece. In the score which he presented to his former teacher, Britten inscribed each movement with a description of Bridge's personality such as 'Integrity' and so on. Each movement, however, also has an 'official' title, and several of them are satirical and sometimes vitriolic, poking fun at traditional styles, such as the Viennese Waltz, the classical Bourre and the Aria Italiana. We can imagine Bridge and Britten sharing jokes about these conventions during their lessons. Another aspect of the work is that it was Britten's response to the Neoclassical Movement of the time, as taken up also by Prokofiev in his Classical Symphony, and Stravinsky with several works, including Apollo and Pulcinella. Finally, the last factor is that Britain set out to show off both the prowess of the Boyd Neel orchestra and his own mastery of writing for strings (being an excellent violist himself - listen to the many juicy parts he gives to the violas in these works). There are many unusual and spectacular effects and textural innovations to delight the ear, including thrumming sounds which transform the orchestra into a huge guitar. Britten's sheer joy in writing for strings should communicate itself to the players.

There is a third SACD performance to add to the comparison in the case of the Bridge Variations - one from Pentatone and the Netherlands Chamber Orchestra (Britten: Frank Bridge Variations, Hartmann: Concerto Funebre, Bartok: Divertimento - Nikolic). This is certainly the best recording, in a church but with controlled ambience and stunning presence, of what sounds like an even larger string ensemble than the Kiev group. They are arrayed in an arc before you, behind the speakers, and not a single detail is missed, with ravishing tone colours, from brilliant, through silky and smoky to the basses' growls. A 5.0 recording, there still remains ample deep bass to make a subwoofer very happy, and this makes for a wonderfully thrilling and realistic multi-channel experience.

My impressions of the Kiev and Scottish ensembles' approaches to Les Illuminations are also evident in the Bridge Variations. The Scots again are more angular, spiky and bring out the modernism of the piece, while the Russians take a more Romantic and moulded approach. In both cases, they respond to Britten's wit, but the Scots do so with a sardonic tone, and the Russians a glittering laugh. Both of the Elegies, with their stalking bass lines, are deeply felt, as is the wonderful Mahlerian section after the closing fugue ,where one can feel Britten's love of his teacher almost as intensely as Mahler felt for his beloved Alma. But for my money the finest performance of the three is from the Netherlanders under Gordon Nicolic. Their involvement is total, risks are taken in the virtuoso Presto movements and the sheer exuberabce of playing this in wonderful music comes straight out of the speakers at you. The reckless speed at which they fizz and sparkle through the Aria Italiana, middle strings strumming away like frantic guitarists, is unmissable, and the movement's throw-away ending just leaves you with a grin on your face and a temptation to yell out 'Bravo!'. Equally, their deeply moving Elegy is lacerating in its intensity, and the Mahlerian section in the last movement positively glows with affection and admiration. Not only is the best of the three accounts so far on SA-CD, but it ranks high amongst all the available versions. One feels that Frank Bridge has been given a testimonal as personal as Elgar's portrayal of his friends in the Enigma Variations, another great monument to friendship.

The first, and earliest, of the Britten works on the MDG disc is the Simple Symphony, also for strings. It takes themes from Britten's juvenile piano works and again is neoclassical in approach. It has less elaborate and difficult part-writing than the Bridge Variations, but is certainly not for amateurs. If you are new to Britten, it is an excellent 'way in'; tuneful and again whimsically humorous - note the movement titles, 'Boisterous Burree', 'Playful Pizzicato' etc. The Kiev group under Roman Kofman play it well and affectionately, but lack the sheer dynamic energy of the Britten performance on Decca. One thing I do regret is Kofman's sudden change of tempo in the trio of the Bourree. He drops to about half-speed and the pounding string chords loose all their impact. No such speed change is noted in the score, which merely says 'Molto pesante', very heavy. Being used to the thrilling sound of these stamping chords after the running string lines as performed by Britten, I felt like a passenger in a car brought suddenly to a halt with whiplash by Koffman's unauthorised heavy braking. A blemish on an otherwise enjoyable performance of the Simple Symphony for me, then, but if you haven't heard the movement performed correctly before, maybe you won't mind!

To summarize, all three of these discs have performances which show different aspects of Britten's masterpieces. The approaches, both of performance and engineering, are valid and add to one's appreciation of the music. Why have to choose one? Personally, I'm very happy to have all three available to suit my mood. Kiev for a late evening, relaxing and moving experience in a lovely acoustic, the Scottish Ensemble for a perhaps uncomfortable and confrontational revelation of the Britten's spikier and more abrasive side, and the Netherlanders simply to blow my socks off! Who could want anything more?