The Pearls of Polish Music - Lutosławski

This superb SACD contains three of Lutoslawski’s most popular and accessible works.

The recording sessions took place between March and May 2004 at the Concert Studio of Polish Radio in Warsaw. The pieces were recorded in HD PCM and converted to DSD by Polyhymnia and the sound throughout has an outstanding vividness and realism, especially from the 5.0 surround sound layer.

The first piece on the disc is the powerful three-movement Concerto for Orchestra that was written in 1954 and has received a number of fine performances on CD, but I have heard none better than this one.

The opening Intrada with its driving rhythms is based on a folk tune and is followed by a contrasting Capriccio notturno e Arioso with its spare textures and scurrying wind and strings at the start and a hammering fanfare- like central section. It ends with cleanly articulated percussion dying away to silence, an effect perfectly captured by the transparent recording.
In the concluding Passacaglia, Toccata e Corale the experienced Jerzy Maksymiuk and the Sinfonia Varsovia give a thrilling performance, with the incisive brass, sharply etched percussion and virtuoso writing for wind and strings all making their mark and driving the work forward to its exciting conclusion.

The song cycle Chantefleurs et Chantefables comes next. These nine short songs are settings of poems by the surrealist poet Robert Desnos. This was one of Lutoslawski’s final and most beautiful works written in 1991, and the composer’s fastidious orchestration has a lightness and crystalline clarity, reminiscent of Ravel, which is captured to perfection here by the engineers. The excellent soloist is the soprano Olga Pasiecznick who has already recorded this work for Naxos in 1997. She has a lovely childlike voice in keeping with the spirit of the poems and is balanced perfectly with the orchestra.

Finally come the Variations on a Theme by Paganini. This is, of course, a set of variations on the well-known Paganini 24th Caprice for solo violin used by Rachmaninov, Brahms, Blacher and many other composers. Originally it was written for piano duet, but in 1977 Lutoslawski was asked by the pianist Felicja Blumental for a composition, and revised these Variations as a short Concerto for Piano and Orchestra. Although only lasting just over 11 minutes it is a brilliant piece that deserves to be as popular as Rachmaninov’s Rhapsody on a theme of Paganini. The soloist Janusz Olejniczak, known for his work in Polanski’s film ‘The Pianist’, meets all the demands of the piece with ease.

The insert booklet has good notes in Polish and English but there are no texts or translations provided for the songs.

At present this wonderful SACD is only available direct from the BeArTon website, but deserves much wider distribution. I recommend it most highly. 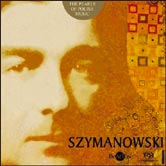