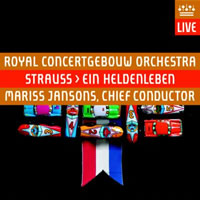 
On September 4 2004 Mariss Jansons conducted his first concert as chief conductor of the Royal Concertgebouw Orchestra at the Amsterdam Concertgebouw. This very successful performance was recorded on 5.0 surround DSD and is now available on a Hybrid Multichannel SACD on the Orchestra’s own independent label RCO Live.

A live recording of Ein Heldenleben played by one of the finest European orchestras with a long Straussian tradition under one of the great conductors of our time must be an outright winner mustn’t it?

Although it has many sterling qualities in the final analysis this recording fails to reach my (too high?) expectations.
In spite of the superb orchestral playing by the Concertgebouw orchestra the performance just never fully catches fire. It has all the purring smoothness of a well-oiled machine, avoiding any sense of risk and danger. Those who sometimes criticise Karajan for his elimination of rough edges in his recordings should hear this one!

The first section (Der Held) is pretty impressive, showing great attack by the lower strings and horns in the opening bars and vividly conjuring up the virile hero of the work’s title.
However, the critics as depicted here (Des Helden Widersacher), seem to be a rather tame group quite unlike the vicious and spiteful characters on Fritz Reiner’s version, and in the central part of this section Jansons relaxes the tempo too much, luxuriating in the undeniable beauty of the string playing. With the arrival of Mrs. Strauss (Des Helden Gefährtin) we have the violin solos played deftly and well characterised by Alexander Kerr. The soloist is recorded in perfect perspective with the orchestra without any of the highlighting found on so many other recordings. In this long section of the work Jansons again tends to slow down too much eventually creating an air of somnolence.

The offstage fanfares preceding the battle music (Des Helden Walstatt) are cautious rather than confrontational, although they are suitably distant, perhaps even too much so. This exciting and complex section is well handled by the recording and Jansons builds the music to a thrilling climax, but then unaccountably slows down, where others press forward, to reach the quote of the horn theme from Don Juan.

In the final two sections of the work (Des Heldens Friedenswerke and Des Heldens Weltflucht und Vollendung) the conductor's approach comes into its own with orchestral playing of such beauty and sensitivity that I doubt could be bettered.
Unfortunately, in the final bars, he vulgarises the ending by the addition of a second thwack on the bass drum not present on any other recording of the work that I know. Why?

At first, I was disappointed with the quality of the recording, which seemed too bass rich and lacked presence, placing the listener quite far back in the hall. However, increasing the volume control quite considerably caused everything to snap into place and a very handsome sound was achieved. The surround channels add further bloom to the sumptuous acoustic.

My comparisons for this review have been made with a number of different versions including those listed below whose overall timings may be of interest and provide some guidance to their conductor’s differing approaches.
Thielemann - Vienna PO - DGG (47.06)
Oue - Minnesota Orchestra - Reference Recordings (45.39)
Jansons – Concertgebouw - RCO Live (45.27)
Kempe - Dresden Staatskapelle - (44.12)
Reiner - Chicago SO - Living Stereo (43.39)
R Strauss - Bayerisches Staatsorchester (rec. 1941) - DGG (39.28)

Reiner’s amazing 1954 performance captures every facet of this miraculous score like no other, and in the Living Stereo SACD re-mastering wears its years lightly. It is still the version to buy. 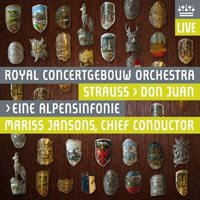