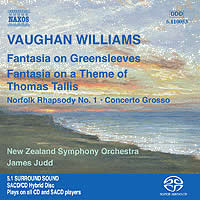 Vaughan Williams: Fantasia on a Theme of Thomas Tallis, Norfolk Rhapsody No. 1, In the Fen Country, Fantasia on Greensleeves, Concerto Grosso


One of the leading English composers of his generation, Vaughan Williams went some way towards creating a specifically English musical idiom. Although he was highly influenced by folk-song, as represented here most clearly in the Norfolk Rhapsody No. 1 and in the Fantasia on Greensleeves, these works are far more than just direct quotations of familiar tunes, and have become orchestral favourites of the twentieth century.

The disc opens seductively with the pizzicato lower strings teasing us with the main theme of the Fantasia on a Theme of Thomas Tallis as the solo group and upper strings hang in the air. The main body of the piece then steals in and is given a very evocative and passionate reading indeed. The textures are at once lush and translucent - as though Judd was combining opulence with reserve. The turbulent mood switches are perfectly captured, as are the distinct groups of strings by the, for once, superb Naxos recording.

This is followed by Norfolk Rhapsody No.1; which is a very evocative tone poem - it successfully captures the almost desolate landscape of the Norfolk Broads and you can hear the lapping water in the woodwinds. Here, it must receive an almost perfect rendition from the New Zealand SO under Judd - they capture the "English" sound perfectly. After this opening, a storm gathers but one gets glimpses of sunlight between the clouds. A march then begins in the second half, which has altogether a more upbeat feel to it before a Ravelian touch or two brings us back to the opening music. Magical.

In the Fen Country [bordering Norfolk for those who don't know the area] opens with a plaintive oboe as if mimicking a song bird. The orchestration gradually builds up to a "sunrise" which Judd and his orchestra judge to perfection - you know it is a climax but it is not overblown. A few bars of surprising harmony moves into a more unsettled middle section before, like the Rhapsody, the opening material returns but in reverse as if the sun was setting on the piece.

The Fantasia on Greensleeves is quite possibly Vaughan-Williams best known work and, for many people, sums up the pastoral sound of England. The mix of modal harmonies and folk music is played as if for the first time here with no trace of irony or staleness that often occurs with "local" orchestras.

The last piece on the disc is also the longest, the Concerto Grosso which is scored for a mixture of three groups of strings (including one which only requires open strings, having been written for a collection of schools orchestras). The opening movement is very dramatic and is recalled in the closing Reprise that follows a playful March. It is a fascinating display of textures, especially when one considers the restrictions that one group has. The dance-like Burlesca Ostinata is by turns balletic and rustic with its "feet". The Sarabande then provides a moment of solemnity before the Scherzo jumps around! The childlike innocence is captured well but the darker moments are found lurking beneath the surface too.

All in all a triumph for Judd and the NZSO - one would never appreciate that they had not grown up with this music, it is played so idiomatically.

Pleasingly, Naxos provide a good recording in which the instruments have a nice sense of space around them but not too much resonance; the MCH layer has a wonderful balance with the rears being completely unobtrusive. It might not quite match the finest Channel Classics or Pentatone discs for detail or sparkle but it is not far behind - if only all Naxos releases were of this standard...