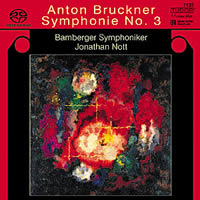 This is the second recording of Bruckner’s 3rd symphony to appear on SACD and, surprisingly, both are of the 1873 version, which Bruckner never heard performed in his lifetime. It is also the one that includes quotes from Wagner’s Walküre and Tristan in the first and last movements and which I personally prefer to the 1877 or 1889 revisions.

Jonathan Nott, a new name to me, has been the artistic director of the Bamberg Symphony Orchestra since 2000 and on this showing has a great future.

One of the marks of a good Bruckner conductor is the ability to set the correct pulse throughout each movement and so avoid any feeling of stop-go in the music. Nott seems to me to judge his chosen tempi perfectly and, while never seeming hurried, moves the music inexorably forward throughout the 63 minutes of this performance (Nagano takes 68min)

The playing of the orchestra, particularly the brass, is magnificent throughout and the expansive acoustic of the Joseph-Keilberth-Saal in Bamberg seems ideal for Bruckner.

This recording is a co-production with Bavarian Radio so it is probably PCM, but sounds excellent, with the rear speakers providing just the right degree of ambience.

Another fine disc from Nott and his Bamberg forces.

Pacing the first movement in duple time (as the score indicates), Nott draws a nice balance between speed and breadth. Every detail has time to speak, yet is moulded convincingly into a coherent structural framework that allows the mind to follow the musical argument with ease. Nott chooses to avoid making the climaxes comparable with those of the later symphonies - probably wise given the different general strengths of the compositions.

The slow movement is taken with a tempo that allows the five sections to be woven as one whilst retaining their distinctive character. This skill is also used to unify the Scherzo in a way that is greatly satisfying with the conducting that allows this to be viewed as a premonition for the 9th's scherzo. Wonderful brass playing that elucidates every note without overwhelming the strings or wind.

The finale, like many symphonies of Bruckner from this period, draws on the principal motifs of the earlier movements. It is at times like this that one fully appreciates the care and thought of Nott when all of them slot seamlessly into the argument without disturbing the pulse of the movement. Very well done indeed, as is the glowing coda where the white heat of the performance is visceral.

My only reservation (and it is slight) is the slightly recessed recording that places an admittedly beautiful sheen over the orchestra at the expense of the last ounce of detail. That aside, the recording allows the music to (by and large) speak for itself most convincingly.

Recommended on the whole and, recording limitations aside, this disc has returned time and again to my player...