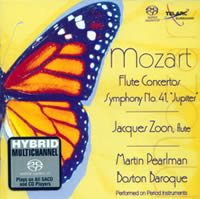 This disc is at one end of the HIP spectrum when compared to Mozart: 2 Flute Concertos - Bezaly, Kangas, with Mozart: Flute Concertos, Flute & Harp Concerto - Gallois/Pierre being an inbetween option for listeners. Jacques Zoon (formerly principal flautist of orchestras like the Concertgebouw, Boston Symphony & the Chamber Orchestra of Europe) is clearly a master of the instrument and plays with wonderful taste.

For this disc, Zoon has written his own cadenzas, which are in a Mozartian style. Throughout, Boston Baroque and Martin Pearlman accompany Zoon most sympathetically and, at times, the like-mindedness by displayed all protaganists is remarkable. Tempi are neither too fast nor too slow, instead they are well judged with a pleasant "spring" to them.

The concertos serve as a warm-up to, arguably, the greatest Classical symphony - Mozart's great C major "Jupiter". Here the Boston players are encouraged to really play out in a way that wasn't appropriate in the preceeding concertos. Incidentally, Zoon forms part of the woodwind in the symphony but clearly doesn't have an outsized ego as his contribution at no time overwhelms other details in the marvellous score.

The decision of Pearlman to divide the violins antiphonally is triumphantly vindicated, not just in the fugal finale but throughout the work as motif's are passed between sections. At times, Pearlman appears to get caught up in too much detail without standing back to admire the bigger picture and the momentum of the opening movement occasionally suffers. This is a symptom that fortunately doesn't occur elsewhere but it does take the halo off an otherwise very good performance.

Sadly, the recording doesn't match the level of the performance. It has a curiously narrow dynamic range that had me tearing my hair out in frustration that what sounded like an attempt at a crescendo by the players doesn't come across like that at all. For me, and I suspect others, this rules this disc out as a recommendable version of either the Jupiter symphony or the flute concertos. 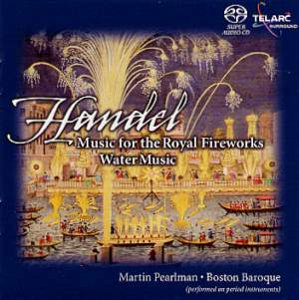 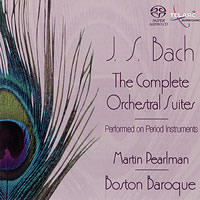 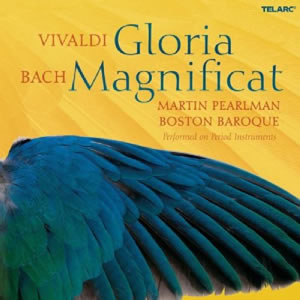 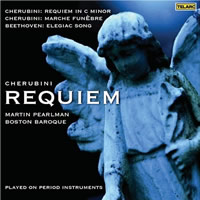 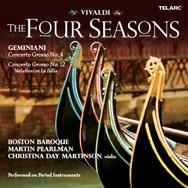