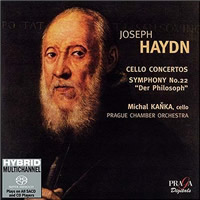 
Among the six cello concertos listed at their time, today only two are considered as authentic: the first in C, since 1961 and the other in D since 1953; both are well loved by the cellists, such as Michal Kaňka who express the post-baroque virtuoso style of the first and the pre-romantic volume of the other. As an interlude, a da chiesa symphony, unusual work with the name "the Philosopher" opens up horizons, unexpected from a Haydn in his thirties.