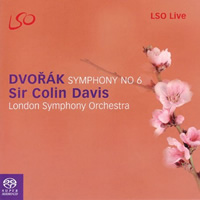 
Dvorák's Sixth Symphony secured him international fame following its premiere 1881. The influence of his native Bohemia, its sounds and its culture are abundant and give the work a refreshing flavour reminiscent of his Slavonic Dances. Sir Colin Davis's recordings of Dvorák's Symphonies Nos 8 and 9 were the first titles released on LSO Live, immediately establishing the label's international reputation. Since then the Symphony No 7 has also been released to great acclaim.