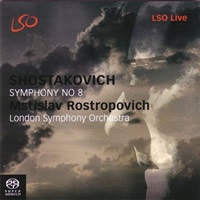 
Although it was written at a time of great optimism in the Soviet Union with the Nazis in retreat, Shostakovich's Eighth Symphony is imbued with a deep sense of sorrow and fear of the future. Whereas the authorities expected a victorius anthem, Shostakovich appeared too affected by the bloody cost of the war. Mstislav Rostropovich again proved that no other conductor is able to so intimately understand the feelings of his dear friend.

Even though the tempi are similar overall, Rostropovich is marginally quicker in the first movement before relaxing a little (and quite distinctly in the Largo fourth movement) so that Berglund comes in about 2 minutes quicker overall - not much, you might think for a work that lasts nearly 70 minutes. However, the approach Rostropovich applies does not work in his favour outside of the concert hall - I can readily accept that this could be quite thrilling for the first time especially with the added benefit of being able to watch the LSO & Rostropovich but robbed of this extra atmosphere, the interpretation doesn't quite stand up for me.

Strangely, the quicker pace in the first movement has moments where one feels that Rostropovich don't always know what or how he wants to communicate to us, the listeners - something which is completely lacking in Berglund's reading. That said, there are moments of drama that (couldn't fail to?) come across but unfortunately, rather than a symphonic structure, the first movement is delivered as an episodic tone poem. As shall be seen, this is not a problem confined purely to this movement but to the symphony as a whole.

The demonic opening of the Allegretto is played with such ferocity that one can almost imagine the players & Rostropovich tearing the notes from the score. However, on the first occurence of the driving motive in the woodwind, Rostropovich makes the LSO play at half speed. I've never heard this done before and for me, and I suspect others, it completely robs the motoric energy of the passage; the sardonic sections are well characterised though. Also, just as you forgive the early woodwind passage, the final notes from the timpani are distressingly out of tune (and surely, care could have been taken to get this right on at least one of the concerts).

The central Allegro non troppo has thrilling moments, particularly from the woodwind and brass but the lower strings (viola's down) sound curiously uninvolved & uninvolving. A tremendous climax is built to the attacca Largo. After all that has gone before, this is totally lacking in tension and a sense of direction despite the dedicated playing the LSO give Rostropovich; here a relaxed approach has relaxed too far for my liking.

The curious finale (Allegretto) emerges as a fugal movement from the dying embers of the Largo (which unfortunately never really got set alight here) and, in the wrong hands, can sound completely out of place with the rest of the symphony. Rostropovich partially redeems himself here with a convincing reading that seems to inspire the whole of the LSO forces. The sometimes fragmentary reading is a convincing (yet questioning) withdrawal from the trouble and turbulence that preceded and convinces the listener that this movement is an organic part of the remainder of the score.

The recording is dry and lacking in atmosphere as with many Barbican discs from LSO Live but the instruments are clearly laid out and the dynamic range is thrillingly large; indeed some might well find this approach disturbingly large. If only the reading were more consistently involving, then this would have been very recommendable indeed.

In my opinion this is an experimental, very sublime but also serious Shostakovich interpretation. The performance is less alarming than by other recordings and contain fine details. The multichannel sound is excellent. Rearspeakers are only slightly involved and offer great spatial enhancement. Dynamic range of the CD layer shows up by 15 and expands to 24 (!) of the Largo which is brilliant. I think this SACD is a secret tip. 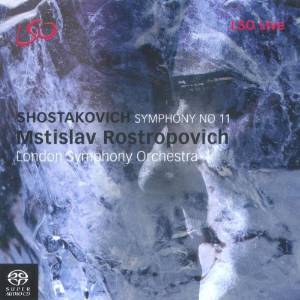 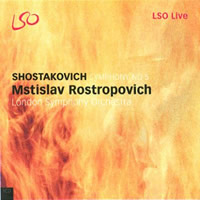