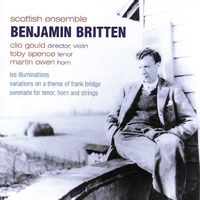 
This recording brings together three youthful masterworks all composed by Benjamin Britten before his 30th birthday.

What a find this disc has been! The Scottish Ensemble was offered a chance to shine by Linn and they took it. Usually, the Scottish Ensemble is a group of 12 string players (7 violins, 2 violas, 2 cellos, 1 bass) but they are joined as an ensemble by an extra violist for the Serenade & Variations and an extra cellist & bassist for the Variations. I needed to check the notes for this, as whilst the tonal balance of this group becomes audibly richer, the tightness of ensemble and unanimity of ensemble do not audibly diminish.

This places a very "light" sound on Britten's early masterpieces, all of which come out sounding refreshed, reinvigorated and confirming Britten's head at the pantheon of C20 British composers. Despite Britten already becoming well established with Pears, Les Illuminations is actually dedicated to Sophie Wyss (who also gave the first complete performance) and Toby Spence is very light toned here appropriately causing me to ponder how effective they could sound with a female voice. Throughout the Scottish Ensemble accompany with sensitivity.

Separating the two works for tenor, is the superb Variations on a Theme of Frank Bridge. The sheer imagination of the sounds that Britten conjures from a string ensemble are quite magical and fortunately the Scottish Ensemble provide a very good, if not a little thin sounding, response to the many and varied demands of this score. Throughout Britten reveals not only own compositional abilities but very wittily parodies those of Rossini, Mahler and others before combining many more works of Bridge into the finale. A master-work given a masterly account - given the things I've read about Britten: Frank Bridge Variations, Hartmann: Concerto Funebre, Bartok: Divertimento - Nikolic, I shall be looking forward hearing this with a slightly larger body of strings.

To complete this generously filled disc, we are treated to a good but not great performance of the Serenade for Tenor, Horn and Strings. For those that haven't heard this great work, it opens in a most extraordinary way with the horn playing natural harmonics (or "out of tune" as my uninitiated wife put it!) before the tenor and strings join forces with the horn in the Pastoral. At first I thought that Toby Spence had forgotten that he was no longer singing Les Illuminations such was the lightness of his tone but it quickly filled out to give the darker moments (of which there are plenty) adequate gravitas. In the Dirge, Spence's tone is really mournful - very well done indeed. Martin Owen (principal of the RPO) plays his part with obvious enthusiasm and musicianship. At no time are memories of Britten (as a conductor), Pears or Dennis Brain erased (will they ever be?) but this is more than just a serviceable performance on SACD. I suspect that I will be giving many repeated listens...

The sound itself is exceptional, beautifully balanced allowing all the articulation and phrasing of the augmented Scottish Ensemble together with clear enunciation of the words from Toby Spence. The MCH adds a natural sense of space to the proceedings which makes for a very pleasant time aurally.

Recommended, especially for the Variations and Les Illuminations.