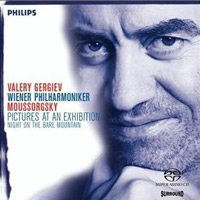 Mussorgsky: Pictures at an Exhibition, Prelude to "Khovanshchina", Night on the Bare Mountain, Gopak from "Sorochintsy Fair"

I purchased this SACD on a whim, and compared to the Naxos recording Mussorgsky: Pictures at an Exhibition, Night on the Bare Mountain - Kuchar (my current favourite on SACD), this is very lame indeed. There is nothing immediately obviously wrong but there is absolutely nothing distinctive in either the musicality on display nor in the recording (4.1 for information). In each section (and in the encores that follow to make up this rather parsimonious disc), the VPO & Gergiev have clearly honed their interpretation but it just doesn't seem to gel into a cohesive whole. There is no gradual build-up of tension and there is (remarkably) no sense of pay-off or exhilaration at the final climax. The recorded sound is unremarkable but clearly has some effects of digititus audible - not one of Philips Classics proudest moments. Whichever way I look at it, there is nothing to wholeheartedly recommend nor rule it out on its own terms but with this music the competition is extremely fierce (even within the less crowded SACD field) and so this cannot be anything other than an also ran.