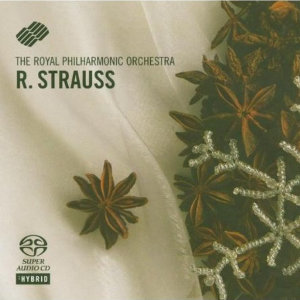 These performances were recorded in March 1995. Unlike most of this RPO series the venue was not CTS Studios, but Studio 1 Abbey Road, which has often provided a suitably spacious acoustic for large-scale orchestral works. The producer was the very experienced Andrew Keener and the engineer the excellent Simon Rhodes.

The orchestra for these sessions numbered 110 players (32 violins, 12 cellos, 11 violas 8 basses, etc.) and on this occasion the guest leader was Hugh Bean who many will remember for his wonderful recording of the Elgar Violin Concerto for EMI many years ago. His solos in all three works are beautifully played.

Although Sir Charles Mackerras is, perhaps, more well known for his recordings of Czech music and as a Mozart and Handel specialist, performances of both the symphonic and operatic works of Richard Strauss have figured prominently throughout his long and distinguished career.

I believe that all these factors have contributed to the making of an outstanding Strauss recording.

The opening of Also sprach Zarathustra is magnificent. For once you can clearly hear the basses notes and bass drum rolls at the start, as well as the point where the organ pedal begins. In most other recordings this is an indeterminate rumbling or growling sound. The timpani, played with great force are astounding, and the whole of this opening section builds to an overwhelming climax crowned by the organ, perfectly in tune (unlike that on the Reiner version, which is in all other respects my favourite performance).The organ pedal notes can also be heard and felt throughout the following Von den Hinterwelten section.

Mackerras does not put a foot wrong and the whole performance has a sweep and conviction that I found most satisfying.
Don Juan also benefits from the conductor’s thrusting approach. It is fast, but not rushed (16m 36s). Compare this with Kempe (16.06), Reiner (16.15) or Strauss’s own recording (15.43)! All these make Karajan’s Don at (18.13) seem a geriatric.
There is some lovely oboe playing in the central section and the confident horns sound glorious at the climax of the work.

The performance of Till Eulenspiegel is in the same vein; full of both character and humour.

It is a shame that a gap of only two seconds silence has been left between each work, but in other respects the presentation of the SACD is very good (a proper SACD jewel box and an outer cardboard sleeve). OK, so the details on the performers are out of date (does any company update its liner notes?), but the booklet does at least have notes on the music and lists the complete Membran/RPO SACD catalogue.

The MC sound is both clear and spacious, a huge improvement on the RBCD, with a coherent orchestral image set somewhat back in the studio. There is no undue spotlighting of instruments and I can hear no trace of excessive multi-miking. The rear speakers add a pleasing ambience to the sound.

Even if this was a full-price disc I would recommend it wholeheartedly, but at 5 Euros it is a bargain. If you love the music of Strauss as much as I do give it a try.

Herbert von Karajan's stunning analogue recording on DG has never been surpassed and is now available as a SACD on Universal which is even more impressive than the vinyl. If you love this work don't miss it.