Marcus, you may have misread my comments. It’s not the playing but the recorded sound that bothered me. Mark raised the question as well, but came to a different conclusion. ... 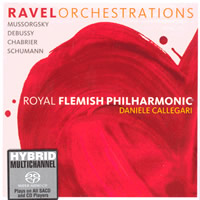 The main works of interest on this SACD are the less often played Ravel orchestrations of Chabrier, Debussy and more surprisingly Schumann. Daniele Callegari and the Royal Flemish Philharmonic give fresh sounding performances of these delightful pieces.

Debussy’s Sarabande moves with lightness and grace, while Chabrier’s Menuet Pompeux sparkles, as it should, with crisp rhythms, accentuated by clear forward percussion, the slower middle section being beautifully phrased by the excellent wind section of this orchestra.

Only four movements exist of Ravel’s transcription of Schumann’s Carnival created at the behest of Nijinsky, the rest are unfortunately lost. Surprisingly for a work so perfectly pianistically conceived the results are totally engaging and Callegari and the orchestra play them with élan.

In Ravel’s orchestration of Mussorgsky’s Pictures at an Exhibition, Callegari is up against considerable competition, but his straightforward, though not particularly distinctive performance, serves the piece well. The final Great Gate of Kiev is notable for some of the most impressive tam-tam strokes I have heard in this work. I would not, however, put his version above any of the many distinguished alternatives.

To obtain the best from this SACD and bring the sound to life it is necessary to crank up the volume more than usual. The recording venue, though clear, is a touch dry and somewhat anonymous. Talent provide no information about the date or venue of the recording, only that Jean-Marie Geijsen of Polyhymnia mastered it.
Unusually for a new multi-channel SACD the recording is 4.0 there being no centre or sub-woofer channels.

The English version of the booklet notes unfortunately read as if a computer had translated them. e.g. “However, is the arranger himself an outstanding composer, then the own composition may hallmark in no small measure influence the arrangement.” (???)

It is perhaps worth noting that this identical programme is available on a very fine sounding Reference Recording HDCD by Eiji Oue and the Minnesota Orchestra that also manages to include Ravel’s Alborada del gracioso and Shéhérazade Overture.

There is much pleasure to be gained from the rarities on this disc, and for that reason alone I would recommend it.