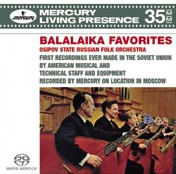 This is quite simply one of the most captivating and enjoyable discs I have ever had the pleasure of hearing. The sound is quite simply fantastic for its age and so well balanced that you could be forgiven that the 3-channel was almost genuine MCH such is the fidelity and detail obtained.

Most of the tracks are folk-based arrangements for the orchestra (there are two "proper" classical arrangements) and all are played with sheer joie-de-vivre and complete virtuosity. It would be completely unfair to single out a particular track or two for special mention but I will it do it anyway! The track Midnight In Moscow has a shimmering undercurrent of balaika's and a beautiful melody floats on top - simply wonderful. Fittingly, what is for me the finest track of all, Waltz of the Faun was composed by Andreyev who founded the first Russian folk instrument orchestra (and in whose honour the Osipov State Russian Folk Orchestra was founded) - a kind of Strauss family on holiday - and one just has to hear the virtuosity on display here; it is simply unbelievable.

All in all, possibly the best record that Mercury ever made.

PS - my drum & bass loving brother, listened in complete silence, totally hooked and then immediately went home and ordered his own copy! I hope that persuades some people who wouldn't normally try this sort of repertoire to give it a whirl - you surely won't regret the small outlay.

[I know that I shouldn't really award 4 stars for a recording that is over 40 years old but the sense of realism is such that I can't avoid doing so...]

Well John, just 13 years after your review of this SACD I took your advice and bought it (only £3 second-hand!). I can understand how it must have impacted on you at the time in those early days of Super Audio sound magic. Great fun from beginning to end if not one for daily listening. Many thanks for the alert. Despite others best efforts to thwart communications this is a good example of the value of exchanges on the old SA-CD.net site and this one.

If one is unable to find this (or unwilling to pay $$), the RBCD version is available new as a licensed reprint from Presto Music.

This was also released on vinyl by Speaker's Corner, a company that usually goes back to the master tapes to do its own analogue remastering. It still seems to be in stock. I don't own this vinyl version, since I have the SACD, but I'm sure it's also an excellent option.