This is a MoFi product. Stereo only, as they always did. I personnally would not call a MoFi product a "wasted opportunity". They always perform an outstanding job at making ...

Contrapunctus: I too have compared the BDA with the new SACD, and find the latter superior. I would not have been able to put my finger on it as well as you have. Thank ... 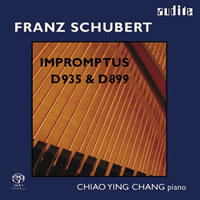 
Still underestimated around 1900 as the sociable, unassuming, light-hearted composer of dances and art songs, the common image of Schubert was changed by thinkers and interpreters such as Theodor W. Adorno and Alfred Brendel after the Second World War. Now Schubert’s torn character was discovered, as well as his self-destructive complexes and struggles with Metternich’s repressive politics. Many fragments and sketches make clear just how hard Schubert fought for his independence from the father-figure of Beethoven. Schubert’s Impromptus are also to be classified in this connection. They were not composed as fantasies or improvisations, as the name might imply; rather, Schubert doubtlessly sought alternatives to Beethoven’s type of sonata with these works.

His Impromptus, D. 899 were written in 1827. They open with a reserved march with variations; as a contrast, there follows a sparkling perpetuum mobile with a strikingly marked middle section. The third piece produces a dream-like atmosphere with its arpeggios out of broken chords and the finale is an Allegro scherzando with downwardly swooping cascades of notes requiring considerable technical elegance from the pianist. Schubert composed his Impromptus, D. 935 during the same year. The beginning is notable for its abrupt contrasts, impetuous dynamics and forward-pressing movement, only absorbed and cushioned by the following Impromptu in A-flat major. This is one of Schubert’s best-loved works, with its easily remembered song-like melody. The third piece adapts the theme from the incidental music to Rosamunde in five contrasting variations; Schubert had also used this theme in the String Quartet in A minor. The finale is a dance-like tune ending with a furious stretta.

I had high hopes for this disc, the first native hi-resolution recording on SACD of these marvellous works, following my experience of Schubert: Sonata in D major, Three Piano Pieces - Koudriakov and they are not completely disappointed but equally they are not quite on the same level of musicianship as Koudriakov manages.

One of my favourite Schubert interpreters that I have heard and seen is Alfred Brendel - he does have (even on the 20+ year old recordings) some instability in the technical department but his musicianship is unerring, always focusing the details on the larger canvas so that the sweet melancholy comes across without distraction. Chang certainly possesses a fine technique and she is generally a good musician as well. However, there are moments where she falls prey to the temptation to gild the lily (all too great in these works) so that, for example, the middle section of the Impromptu D935/1 loses it's potential floating quality; nor does the trio of D935/2 have the flowing quality that others bring to the music nor D935/3 have a childlike naivety and D935/4 lacks the stormy flourish that the best accounts manage. There are other small but crucial examples of how Chang nearly hits the mark in D899 too and yet in such music, a near hit feels like a big miss.

Audite's recording is good, with a natural sense of environment but it is not sufficiently good to recommend as a demonstration piano disc in its own right.