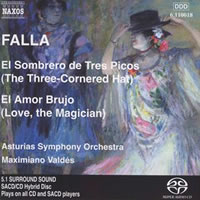 
Manuel de Falla is generally acknowledged as the leading figure in Spanish music of the twentieth century. Rooted in the colour and passion of Andalusia, the ballets El amor brujo (Love the Magician) and El sombrero de tres picos (The Three-Cornered Hat) are two of Falla’s most atmospheric, melodic and rhythmically incisive scores. El amor brujo, the story of Candelas, a gypsy girl haunted by her dead lover, a ghost as jealous in death as he was in life, explores the dark forces which haunt humanity. El sombrero de tres picos, centred on the failed attempt of the Corregidor (wearing his three-cornered hat, the sign of his authority) to seduce the lovely wife of the ugly miller, depicts the follies of everyday life in the Andalusian town of Guadix in the early nineteenth century.