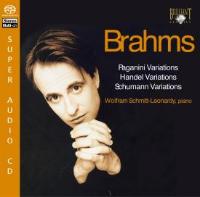 A largely immensely enjoyable disc that is relatively spoiled by the opening work that will be most familiar of the three sets of variations on offer here - the Paganini.

Playing both books with the introductory theme, one can here these as separate studies on Paganini's most famous theme, unlike the way many present it with the first variation of the second book following immediately from the finale to the first book. This is one aspect of the performance to be commended. Another simple beauty of this disc is the allocation of one track per variation so that particular moments may be found with ease (although those without a remote control will find it tiresome to listen to the Schumann variations only, having to skip through the preceding 57 tracks!)

In many ways, the Paganini variations illustrate the strengths and weaknesses of Wolfram Schmitt-Leonardy's playing: it is always immaculately presented and loving phrased but there are times when the character of the music is sacrificed to Schmitt-Leonardy's ideals; there is little dare-devil risk taking that can transform some of the more prosaic variations into a thrilling virtuoso display. Still, I suppose that this is preferable to reducing the whole work to a display of technique and nothing else - however a bit more contrast of mood would not have gone amiss.

Fortunately, neither the Handel or Schumann variations suffer from this aspect as they are less outwardly virtuostic (Schmitt-Leonardy relishes the few variations in these pieces that are) and the accounts may be safely recommended (I await hearing the RQR Pentatone issue from Arrau in the Paganini with interest). One curious aspect to the disc is the sound of the piano from piece to piece. In both the Paganini and Schumann variations, the piano's tone is comparatively thin (these were recorded in January 2004); by July of the same year, the instrument had obviously undergone some treatment which makes the Handel sound far richer (and this is not just the different voicing that Brahms employs).

The sound is not first rank as it's a little too diffuse to form a firm aural picture of the instrument. The highly complex textures are clearly audible though so it's far from being an unpleasant experience, one should just note that there are better examples on disc.

Recommended with minor reservations - especially when one considers the price. 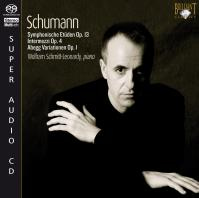